As Europe tries to meet winter storage goals with further restricted flows of Russian natural gas volumes, Asian LNG prices are on the rise again as buyers from the region add pressure to an already tight global market. 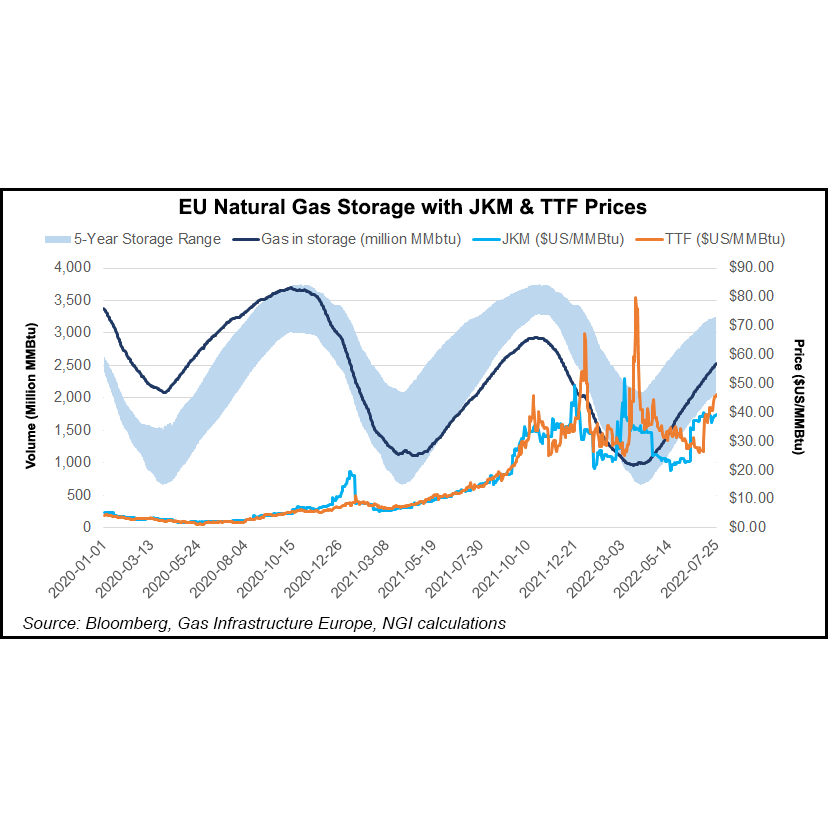 Since before Russia’s February invasion of Ukraine, European buyers have been swaying cargoes of liquefied natural gas to the continent with a healthy price premium over most of Asia. European energy markets have been anticipating increased competition for LNG supply when Asian firms move to restock for winter, but Asian buyers have largely held off during late spring and early summer in the face of record prices.

Kpler Inc.’s Laura Page, senior LNG analyst, told NGI there are signs cargo arrivals to Asia now could be on the rise – especially in the continent’s northeast region – as Japanese and Korean firms increase purchasing.

“As a result of hot weather in northeast Asia and supply side issues, Europe is going to struggle to increase LNG imports substantially from here,” Page said. “Asia will need to start restocking as winter approaches, so I don’t see a substantial uptick in European arrivals on the horizon.”

Page said Japan and South Korea have seen a rise in energy demand as a heat wave impacts the region. Other areas like South Asia also have increased demand for LNG during the period. Meanwhile, the volume of LNG imports to Europe dipped in June and July, which Page told NGI was “reflective of a tighter global market balance.”

The Japan-Korea Marker (JKM) for LNG delivered in September topped $40/MMBtu in the last week of July and has been steadily heading upward along with the Dutch Title Transfer Facility (TTF) benchmark for LNG to Europe. The prompt JKM futures contract closed at $44.83 Monday, and spot prices jumped Tuesday as well.

With flows to Europe on Nord Stream 1 now restricted to 20% of capacity for the foreseeable future, European governments have been increasingly warning about potential shortfalls on the path to meet European Union storage goals. Analysts with European trading firm Energi Danmark wrote Monday that they were expecting “enormous volatility” through the week as anxiety over Russian volumes made an additional price climb “very likely.”

ICIS’ Tomas Marzec-Manser, head of the gas analytics, told NGI adding Asian competition to the mix increases the level of challenge and expense Europe would face during the next few months as it tries to build storage levels.

“Given alternative pipeline suppliers in and around Europe are already running at high rates, the continent will need to continue to rely on LNG as its primary source of supply,” Marzec-Manser said. “While this was manageable, albeit expensive, during the spring when Asian demand falls away, achieving this task through the winter will be particularly difficult and certainly very costly.”

Two of Asia’s largest sources of LNG supply, Australia and the United States, also are experiencing outages at export terminals that are putting further pressure on the market.

Page said one of those outages, at the Freeport LNG terminal in South Texas, has removed four to five cargoes from the market each week since a fire knocked it offline on June 8.

“The facility is now not expected to restart operations until early October, which will continue to weigh on arrivals to Europe,” Page said.

Ongoing labor action at Shell plc’s Prelude Floating LNG platform off the coast of Australia has removed one cargo a week from the Pacific basin since a strike began in mid-June, she said. The Offshore Alliance union and the Electrical Trades Union, representing Prelude FLNG workers, extended the strike until at least Aug. 11.

If there is a silver lining for Europe, Page said, it is the relative inactivity from Chinese firms. China, the world’s largest importer of LNG last year, is set to cede its title back to Japan, according to global energy forecasts. The country has been focusing on increasing domestic natural gas production and procuring coal on the supply side and decreasing demand for natural gas imports as prices soar.