While investments in the global energy industry are expected to jump 8% from 2021 to 2022, investments in fossil fuels have not returned to pre-pandemic levels, according to the International Energy Agency (IEA). 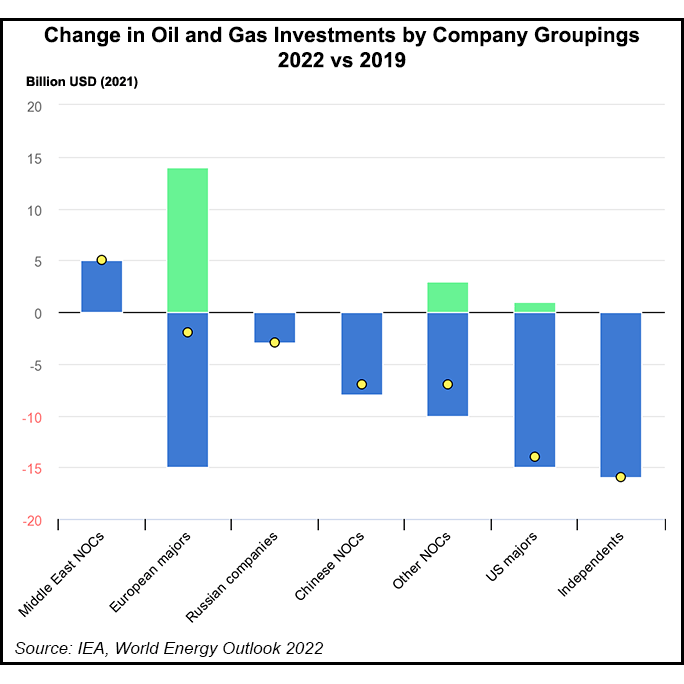 Investments in upstream oil and natural gas activities are projected to rise 10% year/year in 2022, but are likely to fall short of the near-$500 billion investment level seen in 2019, the global energy watchdog said in its World Energy Investment 2022 report.

Among European and U.S. oil and gas companies, the IEA estimated that in 2022, the largest climb in upstream investments could be the result of a 30% increase in spending by the largest U.S. producers, including ExxonMobil, ConocoPhillips and Chevron Corp.

However, cost inflation associated with the global supply chain disruptions, as well as Russia’s invasion of Ukraine, have “pushed upstream costs up by over 25% since 2020, largely due to the increased cost of input materials,” researchers said.

Shortages in labor, cement, steel and critical minerals are playing a major role in the increasing rate of spending, according to the report.

“In a situation where commodity prices are high and supplies are scarce, the focus of investment is squarely on projects that can deliver new volumes in a hurry,” researchers said. “Methane abatement and flaring reductions fall into this category.”

In 2021, about 130 commercial carbon capture projects in 20 countries were announced. Investments in carbon capture, utilization and sequestration (CCUS) also increased to $1.8 billion, with “significant amounts of private capital” beginning to stream toward “young companies with costly technologies to remove CO2 from the air and store or use it,” the IEA said.

The U.S. government surged past other countries in earmarking funds for CCUS, with a record $12 billion targeted for the development and deployment through the Infrastructure Investment and Jobs Act.

A majority of the growth in renewables spending came from increased capital expenditures by global majors in offshore wind, which is expected to nearly double year/year.

The gains in renewable energy investments have been bolstered by spending in renewable power, energy efficiency, and grids and storage, with each spending area expected to see a 6-8% year/year increase.

The pace of growth for renewables, including solar photovoltaic, wind energy, batteries and electric vehicles, is “now growing at rates consistent with reaching global net-zero emissions by 2050,” the IEA said. “There is rapid growth underway in spending on some emerging technologies, notably batteries, low emissions hydrogen, and carbon capture utilization and storage.”

While increased growth has been bolstered by governmental and financial support for the energy transition, “half of the overall increase in spending is a reflection of higher costs,” according to the IEA.

What’s more, said researchers, about half of the $200 billion in added investments could be spent on higher costs, “rather than bringing additional energy supply capacity or savings.”