Upstream investments from Ohio’s natural gas and oil producers rebounded at the beginning of last year, making up the lion’s share of the $2.3 billion spent in the Utica Shale in the first six months of 2021. 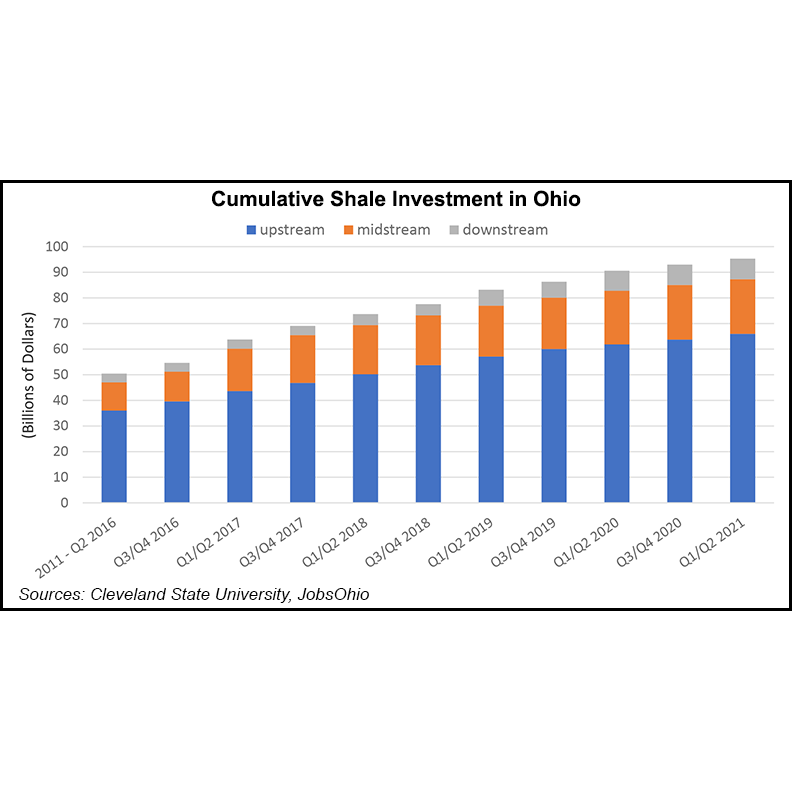 JobsOhio recently released an update to its Shale Investment Dashboard, noting producers spent about $2.2 billion during the first half of last year. It was an around $361 million increase over the last half of 2020. Researchers noted that rising gas and oil prices during the period helped boost royalties paid to the state. Royalties accounted for more than $1 billion of the investments tracked during the period.

Cleveland State University’s (CSU) Andrew Thomas, director of the Energy Policy Center in the Maxine Goodman Levin College of Urban Affairs, said Covid-19 and the impact on gas prices still represented “significant challenges to the industry” during the study period.

“Even so, total investment, including midstream and downstream, was only down 4% from the second half of 2020,” Thomas said. “We anticipate that our next reports will show a marked increase in total investment.”

Ascent Resources Utica Holdings LLC was the top producer during the six month period, with 389 Bcf. It was followed by Encino Energy LLC with 196 Bcf and Gulfport Energy Corp. at 173 Bcf. The top six producers during the first half of last year made up around 89% of the total production, according to ODNR data.

The June update is the 11th report CSU has prepared for Ohio’s economic development corporation on Utica investments. Each report compares upstream, midstream and downstream investments during a six-month period. Together with previous investment to date, cumulative oil and gas investment in Ohio through June 2021 was estimated to be around $95.3 billion. Upstream accounted for $65.9 billion, with $21.4 billion from midstream and $8 billion in downstream industries.

Midstream investment took a significant dip compared to the second half of 2020. The first six months of last year were absent any pipeline or processing capacity developments, with researchers citing continued Covid-19 impacts.

The report noted  $29.1 million spent on gathering system buildout for pipelines and $13.8 million on compression systems.

Researchers wrote that the impacts to midstream investment could likely change within the next two reports with “rising commodity prices approaching 10-year highs” that will likely “put upward pressure on investment spending across all natural gas segments.”In downstream developments, two compressed natural gas refueling stations with a combined investment total of $31.3 million were installed by transit agencies in Cleveland and Columbus. Additional capacity was added at the Marathon Petroleum Corp. refinery in Canton, OH, totaling an estimated $15.8 million.