U.S. natural gas prices rebounded Monday and were set to maintain momentum as benchmarks in Asia and Europe continued to cool. 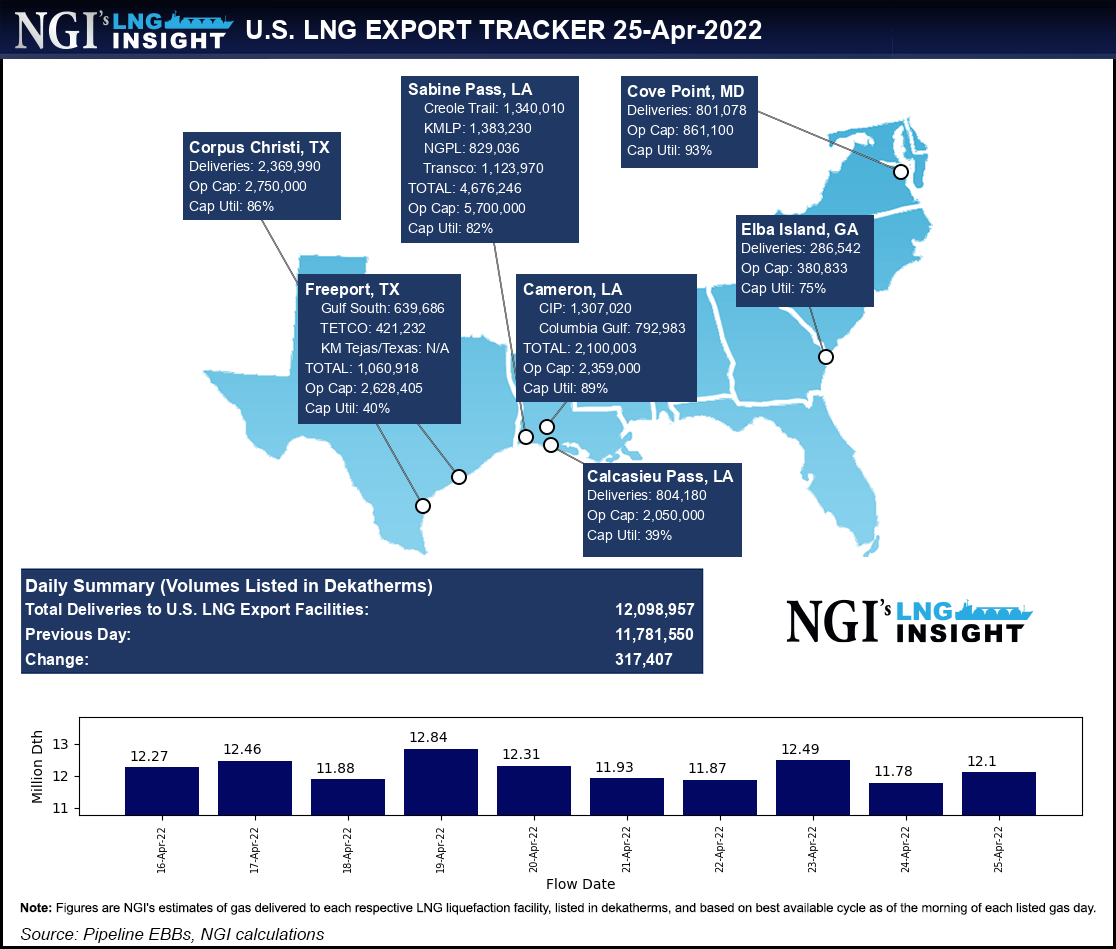 “Daily demand is set to rise mid-week, adding as much as 5.5 Bcf/d by Wednesday and coinciding with the May contract rollover,” said EBW Analytics Group analyst Eli Rubin of the Henry Hub contract.  “Trader positioning after the April rally and ahead of options expiration tomorrow is likely to be a primary driver of natural gas prices in the immediate term.”

Henry Hub jumped across the curve Monday. The May contract finished 13 cents higher at $6.66/MMBtu.

U.S. forecasts trended bearish over the weekend, advertising a pattern with weaker late-season heating demand in the Midwest and East into early May, according to Bespoke Weather Services. But some colder-than-normal weather is lingering in the northern part of the country, opening the possibility of more heating demand and lower storage injections in the coming weeks.

U.S. storage inventories are 23% lower than during the same time in 2021 and 17% lower than the five-year average for this week, according to Rystad Energy.

Europe’s push to replenish depleted storage inventories and wean itself off Russian energy imports have created strong demand for U.S. LNG exports. Freeport LNG said Friday it would restart Train 1 at its export terminal in Texas, according to a filing with the Texas Commission on Environmental Quality. The train has been offline since April 5. Nominations for feed gas deliveries to U.S. terminals inched up Monday to more than 12 Bcf.

Nearly three quarters of U.S. LNG cargoes went to Europe during the first two months of this year, according to NGI calculations.  Prices on the continent were stable last week on warmer weather and an influx of LNG deliveries.

The Title Transfer Facility (TTF) contract was down slightly Monday, with both the May and June contracts trading near $29/MMBtu.

Despite ongoing fears over supply disruptions amid Russia’s war in Ukraine, Russian gas flows to Europe were up Monday after they dipped in line with client requests over the weekend. Unplanned outages in Norwegian gas flows also ended, and flows to the continent were climbing back Monday, as well. Planned seasonal work at Norway’s Troll field is expected to continue until the end of the month.

The European market has also continued to shrug off Russia’s demand that European buyers pay for gas deliveries in rubles when payments come due next month. European buyers can still pay in euros or dollars, but Russia’s Gazprombank would then convert the payments to rubles.

The European Union published guidance Friday that suggested European customers might not violate sanctions against Russia by complying with the country’s order because the conversion to rubles would be made independently of buyers by the Russian bank.

Supply concerns and Europe’s plans to step-up LNG purchases to displace Russian gas supplies have kept TTF at a premium to the Japan-Korea Marker (JKM).

Demand in North Asia has weakened. Covid-19 mitigation efforts in China have dented energy consumption. Beijing was working to contain an outbreak as the week got underway, while a month-long lockdown continued in Shanghai.

China’s importers were reportedly looking to sell spare LNG supplies as demand has weakened there in recent weeks and spot prices have remained high. The Chinese are “still reticent” to engage the spot market at current rates and Europe is “still desperately in need,” said trading firm Trident LNG, which is supporting a “decent spread between TTF and JKM.”

Mild weather in Japan and Korea is limiting consumption in the region, too.

Rising Covid-19 cases in China and intensifying efforts to curb the spread are also weighing on oil. Oil benchmarks have slipped by an average of 5% over the past week as demand concerns grow, said analysts at Engie EnergyScan. Brent for June delivery lost $4.33 to close at $102.32/bbl on Monday.

As spot prices have moved higher, Japan announced that it would increase funding for LNG import capacity in the country and financing for overseas LNG projects to generate more supplies.

And on Monday, Dutch gas grid operator NV Nederlandse Gasunie said a floating regasification and storage unit would arrive at the Port of Eemshaven in Groningen by August. Gasunie said a permanent import terminal would be built at a later stage to help boost LNG supplies for the country. The Dutch government has decided against increasing output from the Groningent gas field in favor of more LNG cargoes.