An updated biannual report posted by the Pennsylvania Department of Environmental Protection (DEP) shows that the state’s natural gas production saw a more than 40% increase in the first half of 2012 compared to the second half of 2011, and more than doubled in a year. 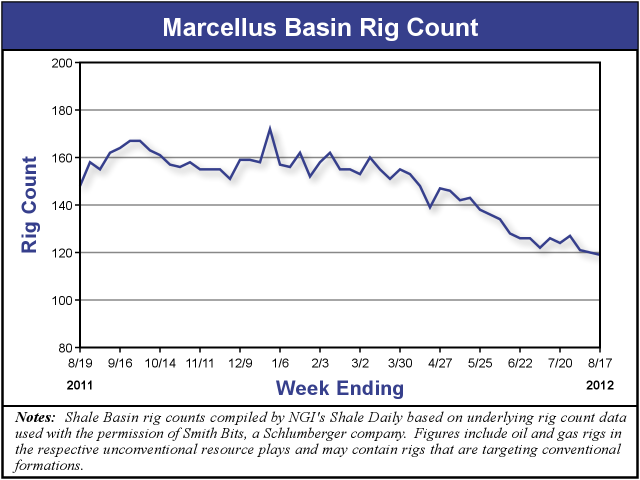 According to the DEP, gas production from unconventional wells totaled 894.8 Bcf during 1H2012, a figure that includes wells targeting the Utica Shale and other formations, but the majority came from the Marcellus Shale.

“Talisman’s data came in Tuesday and then it was reflected [in the final report] on Wednesday morning,” Sunday said. “Their production data came in last week and there really wasn’t an issue there, it was with their waste reports. They had reported some of their waste in gallons instead of barrels.

“But [in the event of an error], as a function of the system, it all gets taken down. So even though they weren’t revising production data, their production data came down, too.”

But there have been a series of glitches with the most recent biannual report. On Tuesday, the DEP blamed Chesapeake for submitting data that violated database rules, causing the largest producing company in the state to be temporarily excluded from the report. Talisman’s numbers were off the report on Tuesday but back in again on Wednesday.

On Thursday afternoon, the version of the report available for download included Chesapeake and Talisman, but 39.6 Bcf from SWEPI LP had been subtracted. Sunday said SWEPI’s numbers were removed because the company, a Royal Dutch Shell plc subsidiary, had made a similar error to Talisman’s.

Lou D’Amico, president of the Pennsylvania Independent Oil and Gas Association (PIOGA), predicted that the DEP would ultimately sort the reporting issues out.

“The DEP is changing a lot of the computer systems and processes they used in the past to keep track of production,” D’Amico told NGI’s Shale Daily on Thursday. “Government is usually about a day late and a dollar shy with technology, compared to private industry, so I think they’re still catching up. But I see it as a short-term glitch; I don’t think there are any institutional problems there.”

D’Amico said there were two events that resulted in the higher production totals: increased drilling activity and more completed infrastructure.

“Up until several months ago, drilling activity had continued to increase,” D’Amico said. “Obviously that has since dropped off dramatically because of dry gas pricing. But the other factor is that at one point in the last year there were more than 1,300 wells drilled and completed and yet to be tied in line. A lot of infrastructure — midstream lines — is going into service, so gas that was waiting on production is finally getting out here.”

“These production reports are proof-positive that the Marcellus Shale holds tremendous potential for decades to come,” Patrick Creighton, spokesman for the Marcellus Shale Coalition, told NGI’s Shale Daily on Thursday. “What’s even more interesting [is] the Marcellus is still a relatively young play with only a few thousand producing wells in Pennsylvania. When you add in West Virginia, Ohio and hopefully one day New York, only then will the full potential of the Marcellus be realized.”

Whether the enormous production increases from the Marcellus continue is another question altogether. Thanks to natural gas prices that reached 10-year lows earlier this year, dry gas production has fallen out of favor in exchange for more liquid targets.

According to NGI‘s Shale Daily Unconventional Rig Count for the week ending Aug. 17, the number of rigs actively drilling in the Marcellus sits at 119 rigs, which is 20% below the 148 rigs that were operating one year ago.