Natural gas consumption continued to increase across the world in May and exports were up to meet demand, according to the International Energy Agency (IEA). 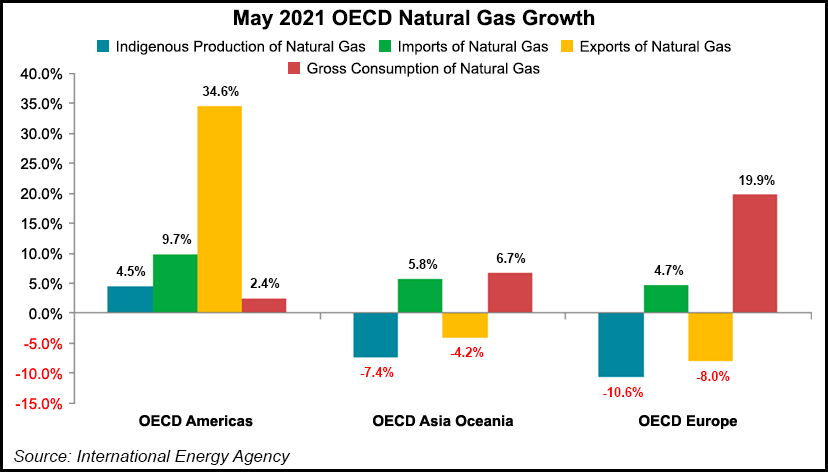 IEA in its latest monthly report said gross natural gas consumption increased 7.4% year/year to 125.9 million cubic meters (MMcm) in developed nations, defined as the Organization for Economic Cooperation and Development (OECD) members. While natural gas demand has increased slightly throughout the pandemic, it’s seen another bump this year as economies rebound from the Covid-19 virus.

IEA said consumption was up 4.6% year-to-date through May. Exports were also up to match that growth.

Total OECD exports grew by 3.7% year/year in May to about 65 MMcm, IEA researchers said. The increase was largely driven by exports from the United States, with the OECD Americas region up 34.6% year/year.

U.S.  liquefied natural gas (LNG) export terminals have run at or near capacity most of the summer, with feed gas deliveries regularly flowing at 10 Bcf/d or higher.

Overall, OECD exports were up 1.3% through the first five months of the year. Broken down, pipeline exports declined by 2% year/year in May, while LNG exports jumped 23.1% over the same time.

Natural gas production across the member countries grew by 1.2% to 128.3 MMcm. Production in the United States was up by 5.2% in May and offset declines in the UK and Australia. OECD production was down by 2.9% from January to May.

Unplanned outages in the North Sea have impacted domestic production in Europe this year, putting a squeeze on pipeline imports at a time when those from Russia have also fallen as the country works toward bringing the Nord Stream 2 pipeline online.

The trend has left the continent short of supplies, particularly as it’s had to battle for LNG supplies with Asia, where hot weather has driven demand.

Scorching heat across the world has driven up LNG demand this summer. For example, a drought in South America has created record natural gas demand there, pulling additional cargoes out of the market.

Things are likely to stay tight in the near term given market fundamentals that have remained largely the same since the beginning of the year. European and Asian natural gas benchmarks are trading near $16/MMBtu for September. The Title Transfer Facility in Europe has continued to set records this week, while Asian spot prices are near seasonal highs.

An “increasingly dire” storage situation in Europe and a 30% year/year jump in China’s LNG imports is fueling the latest rally, according to analysts at BofA Global Research.

“Heading into the winter season, the LNG market’s fuse has been lit. Global utilization rates have been running at the high end of the five-year average before turning lower this summer due to maintenance outages,” BofA said in note to clients on Thursday. “With little spare production capacity available and limited European storage —  the typical lever for balancing the global LNG market — there is little cushion left this winter.”