The rebound in oil prices since the lows of April is expected to slow and future gains will depend on a variety of factors including the strength of oil demand and a global economic recovery as the world still wrestles with the Covid-19 pandemic, according to Moody’s Investors Service. 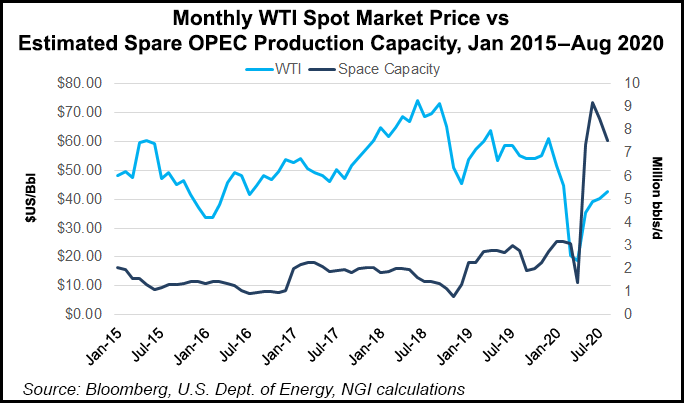 The initial rebound in oil prices has flattened since July, reflecting what Moody’s analysts said is a “slowdown in the recovery of demand, as well as oil production returning after shut-ins in March and April.” A dramatic rebound in oil prices from April, when Brent crude slipped below $20/bbl and West Texas Intermediate (WTI) plunged into negative territory, “reflected improving market fundamentals, both on the demand and supply side,” Moody’s said.

Global oil demand continues to recover and stood at about 92% of its pre-pandemic level, having shrunk by about 10 million b/d by August, and by more than 23 million b/d in April, according to Moody’s.

Going forward, the firm expects the demand rebound and price recovery to be not only gradual, but rocky as well. Prices are likely to be highly volatile, “with periods outside the top or bottom ends of our medium term price range,” the credit ratings agency said.

Fears have emerged in recent weeks over the sustainability of the oil market rebalancing. A resurgence of Covid-19 cases in many countries, lockdown measures, continued teleworking and a weakened transportation sector have clouded the outlook despite stimulus efforts that have lifted the global economy.

Goldman Sachs Commodities Research noted that those factors helped erase all the gains oil made over the summer during the first week of September. However, as stocks draw down and a supply deficit emerges as the year comes to an end, analysts are forecasting a year-end Brent crude price of $49/bbl.

Moody’s added that prices will continue getting support from the cooperation of producing nations, which cut production to protect prices earlier in 2020 as the pandemic took hold. In North America, the firm also expects oil production levels to continue recovering this year, but stressed that those volumes should flatten in 2021 even if prices accelerate, mainly because companies must now repair their balance sheets after the downturn.

Crude prices got a lift Thursday after the Organization of the Petroleum Exporting Countries and its allies, aka OPEC-plus met virtually to discuss production policy. While no additional output cuts were announced, members signaled that they will stick with current production quotas.

“The alliance today showed that it recognizes the unfavorable market developments, acknowledging the risk of oil demand being reduced as a result of rising infections,” Rystad Energy’s Bjornar Tonhaugen, head of oil markets, said after the meeting. He added that OPEC-plus “gave the impression that it does not sweep troubles under the carpet.”

The group’s meeting came just days after both OPEC and the International Energy Agency reduced their projections for oil demand. After the meeting, Brent crude gained $1.08 on Thursday to finish at $43.40/bbl, while WTI followed with similarly strong gains, adding nearly $1.00 to finish at $40.97.

However, prices fell Monday as Libya was poised to resume some crude exports. Brent finished at $41.44 and WTI closed at $39.31.

“Geopolitical issues or attempts to manage supply by the OPEC-plus group of oil-producing nations may add to an uneven recovery in demand and drive wider price fluctuations from time to time,” Moody’s said of the volatility it expects as the market finds balance again.

Barclays increased its 2021 oil price outlook Monday. Analysts said they see limited downside risk next year, “due primarily to the evolving response function of governments as well as the general public towards the virus threat and continued OPEC-plus restraint, with risk-reward of the current strategy skewed to the upside for the group over the forecast horizon, in our view.”