ExxonMobil on Tuesday pledged $3 billion to lower emissions in a bid to bolster its environmental record even as it slashed overall capital spending and vowed to safeguard its dividend. 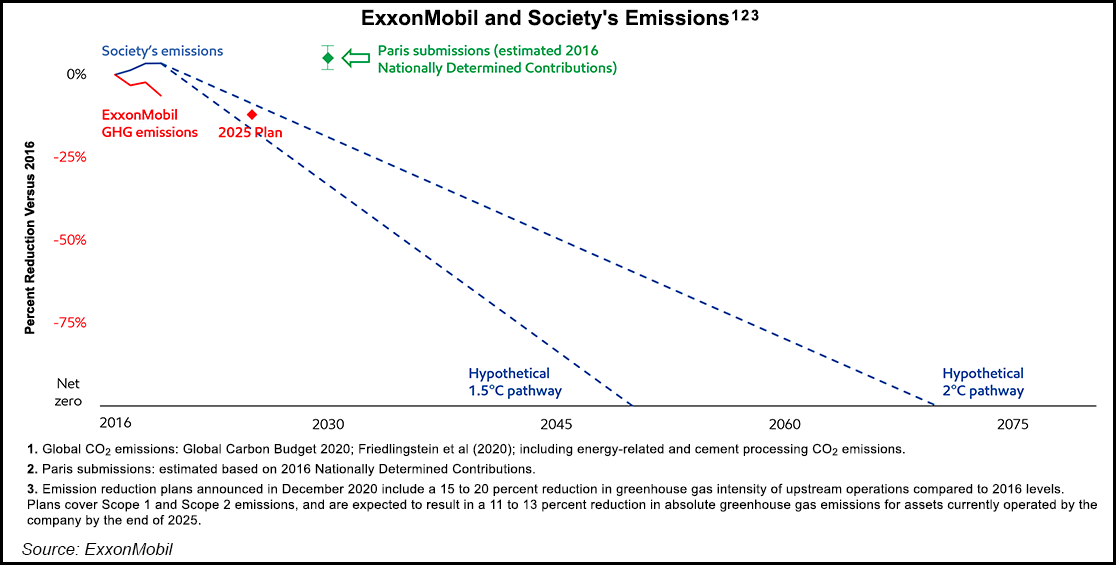 Executives, while declining to directly address a news report that ExxonMobil and fellow supermajor Chevron Corp. had discussed a potential tie-up, also said they continue to explore strategic merger and acquisition (M&A) opportunities.

All of this came as ExxonMobil on Tuesday reported a full-year loss of more than $22.4 billion (minus $5.25/share) – down from a profit of $14.3 billion in 2019 ($3.36/share) — and its fourth-consecutive quarterly loss in the wake of the pandemic’s demand destruction. It marked the first annual loss since the merger of Exxon and Mobil in 1999.

Following through on a plan foreshadowed late in 2020 in response to investor criticism of its environmental track record, ExxonMobil said this week it would invest $3 billion over the next five years in projects aimed at reducing greenhouse gas (GHG) emissions. The company said it was creating ExxonMobil Low Carbon Solutions and evaluating 20 new carbon capture projects globally, from Texas to Qatar.

ExxonMobil said its initial focus would center on capturing and storing emissions from industrial plants, minimizing the levels of carbon dioxide. Executives noted that both climate scientists and, increasingly, governments around the world are recognizing carbon capture, utilization and storage (CCUS) as vital components of a larger effort to slow global warming.

CCUS is “being recognized as an important part of the solution set in terms of achieving ambitions of the Paris agreement,” CEO Darren Woods told analysts during the quarterly earnings call Tuesday. He referred to the United Nations (UN) climate accord, better known as the Paris agreement. “I think certainly here in the U.S., we’ve got an administration that’s interested in progressing in this space.”

The Biden administration has vowed to step up oversight of fossil fuels and heighten standards for fuel economy to curb emissions. The president campaigned on a promise to put the United States on a path to a carbon-free power sector by 2035 and a carbon-neutral economy by 2050.

More investors are also pressuring major U.S. energy companies to step up investments and heighten their goals in contributing to efforts intended to combat climate change. San Francisco-based Engine No. 1 LLC, for example, said in December it wanted to nominate independent board candidates and encourage ExxonMobil to boost its alternative energy holdings.

Woods said the company is aggressively ramping up its environmental efforts, but he cautioned that it would take years to see the full results. “I think this is a complex area; there are a lot of variables at play that we’ve got to bring together,” he told investors.

Worldwide production, meanwhile, was 3.7 million boe/d in 4Q2020, consistent with the prior quarter but down more than 20% from the final quarter of 2019. Output was down both overseas and domestically, but work in the Permian Basin proved a notable exception.

During the quarter, production volumes in the Permian, where ExxonMobil is among the most active players, averaged 418,000 boe/d, an increase of 42% from 4Q2019.

The company said its production plans for the Permian are “flexible,” but the basin is expected to continue as a source of volume strength.

Despite coming off of what Woods called the most “challenging market conditions ExxonMobil has ever experienced” in 2020, the chief executive said the company has both the resources and interest to pursue M&A. He declined to discuss a Wall Street Journal report this week that said Woods and Chevron CEO Mike Wirth held preliminary discussions in 2020 about a megamerger. However, Woods said acquisitions are always on his radar.

“We look at a lot of things” across the energy sector and “we’ve been active in that for quite some time and continue to be active to look for opportunities to grow value, unique value,” Woods said.

ExxonMobil’s overall spending is projected to decline further after falling last year. Capital and exploration expenditures in the fourth quarter, at $4.8 billion, were nearly half the level of a year earlier. Full-year expenditures of $21.4 billion were down nearly 50% from 2019.

The company said it expects to generate additional annual savings of $3 billion by 2023 through, among other steps, divesting assets. This is on top of plans to reduce capital spending further through 2025.

Executives said the cuts and savings would bolster long-term margins and cash generation, enabling it to maintain its dividend even if oil prices fail to remain much above the $50/bbl level this year. The company said prices could fall even lower, to around $45, and it could step up cost cuts to maintain the dividend.

“We’ve got lots of flexibility under different price environments to sustain the dividend,” Woods said. “So we feel really good about where we’re at today that we’ve got good upside with respect to growing the cash flow.”

The first quarter dividend of 87 cents/share was level with its previous seven payouts.

The company finished 2020, however, on a sour note. Fourth quarter cash flow from operations declined more than 37% from a year earlier to $4 billion.