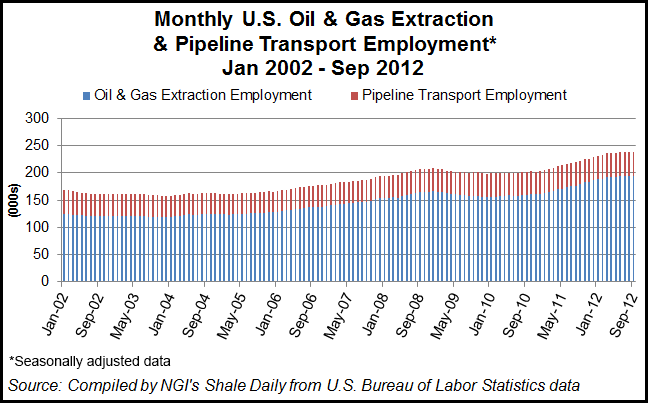 “The entire upstream unconventional oil and gas sector will support more than 1.7 million jobs in 2012 at average wage levels dramatically higher than the general economy,” said the IHS study, “America’s New Energy Future: The Unconventional Oil and Gas Revolution and the Economy.”

The number of domestic jobs is expected to jump to 2.5 million over the next three years and rise to almost 3.5 million in 2035.

“The growth of unconventional oil and gas production is creating a new energy reality for the United States,” said IHS Vice Chairman Daniel Yergin. “That growth has not only contributed to U.S. energy security but is a significant source of new jobs and economic activity at a time when the economy is a top priority.”

The latest report is the first in a series of major studies measuring the economic impacts of unconventional oil and gas activity in the United States. Subsequent reports are to focus on the economic impacts on a state-by-state level and the potential for a U.S. manufacturing renaissance.

The report is based on the IHS CERA analyses of each play, which calculate the investment of capital, labor and other inputs required to produce these hydrocarbons. The economic effects of these investments are then calculated using proprietary IHS Global Insight economic impact assessment and macroeconomic models to generate the contributions to employment, gross domestic product (GDP) growth, labor income and tax revenues that would result from the higher level of unconventional gas development.

The research was supported by the American Petroleum Institute, Institute for 21st Century Energy, the American Chemistry Council and the Natural Gas Supply Association.

“The United States currently has the highest rate of growth in crude oil production capacity in the world and is virtually self-sufficient in natural gas, except for some gas from Canada,” said Yergin. “This is a stark contrast from when, prior to the unconventional revolution, it was expected that the U.S. would soon become heavily dependent on gas imports.”

Future growth in unconventional production will drive continued economic expansion in both the near- and long-term, researchers said.

Among other things, IHS research found that:

“A key reason for the profound economic impacts associated with unconventional oil and gas production is the lengthy, complex, domestically sourced supply chains, which support American jobs,” IHS said. “The total employment contribution for overall upstream unconventional activity relative to total U.S. employment will average 1.5% over the short-term (2012-2015), 1.9% over the intermediate term (2015-2020), and 2% over the long-term (2020-2035).”

The energy industry, which is capital-intensive by nature, relies on suppliers in construction, fabricated materials and heavy equipment, but it also requires a broad range of material and services such as legal and financial services and information technology, said IHS Vice President John Larson.

A cursory look at current and historical U.S energy industry employment data indicates some interesting trends as well, said NGI‘s Pat Rau, director of strategy and research. According to September U.S. Bureau of Labor Statistics (BLS) data, there were 239,300 people employed in the oil and gas extraction, and pipeline transport industries. Of that number, 195,000 were employed in the oil and gas extraction sector, with the remaining 44,300 in the pipeline transport segment.

The BLS defines industries in the oil and gas extraction sector as those that “operate and/or develop oil and gas field properties,” while the pipeline transportation sub-sector includes transmission pipelines to transport products “such as crude oil, natural gas, refined petroleum products and slurry.”

However, while growth in U.S. oil and gas extraction jobs overall has trended upward in the last 10 years, U.S. pipeline transport job growth has been a more recent phenomenon, Rau said. After falling from 43,300 jobs in January 2002, U.S. pipeline transport industry employment fell to a low of 37,600 in July 2005, and has since steadily rebounded to 44,300 in September.