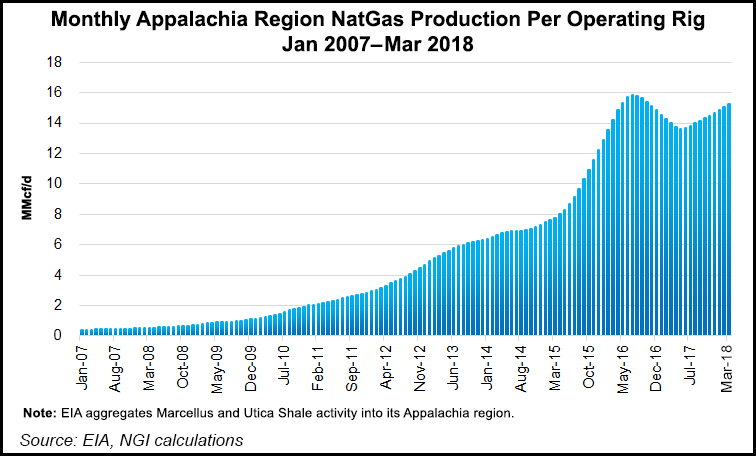 “Last year we wrote a piece on the terrifying improvements of gas wells,” said analyst Jean Ann Salisbury and her colleagues. The question was, were the gains sustainable?

“We thought that 5-10% was sustainable over the medium term,” and the latest update reinforces that thesis.

Bernstein analysts were surprised in their review of 2017 initial production (IP) rates versus 2016 figures for onshore gas production. They reviewed wells across the onshore, including in the Eagle Ford Shale and Permian Basin.

“Overall, we found that the average gas IP rate of wells was up 11% year/year,” Salisbury said. “Part of the continuing improvement is due to higher oil IPs of associated basins driving further improvements in gas IPs.”

The increase of 11% is lower than last year’s 30% jump, but it should be more sustainable in the near-to-medium term. Analysts suspect the decline last year came from several factors.

To begin with, there were roughly 17% more wells drilled last year than in 2016. “Certain basins saw more wells while others had fewer, but overall, regions with more wells saw productivity declines due to less selective drilling.”

Higher IPs also led to a sharper early decline, which meant cumulative production did not improve 1:1 with the IP.

In addition, IP rates from the surging Utica and Haynesville have “come down to earth.” Wells should continue to see output improve, but only slightly once decline rates are factored in, “suggesting we may be nearing steady state.”

With better IPs and improved productivity, “we need even fewer rigs and spend than we thought to meet gas demand by 2020, which feeds into our recently downgraded gas price of $2.25/Mcf post 2019,” Salisbury said.

For example, analysts estimated that the new level of long-term average Marcellus-equivalent rigs required to keep gas production flat is now 45, versus 73 last year because of the 20% improvement in an average well.

From 2011 to 2017 the major gas improvements were in the Marcellus and Utica, which Bernstein said averaged a 20-27% compound annual growth rate. Many exploration and production companies beyond Appalachia began turning their attention to oil-heavy basins beginning in 2011, thus decreasing the average gas production per well across the onshore. However, in 2016, gas productivity improvements were seen almost everywhere, except for the Midcontinent, Denver-Julesburg Basin and the Fayetteville Shale.

Production continues to surge, including for Gulfport Energy Corp., whose 1Q2018 Utica output grew to more than 1 Bcfe/d, up 37% year/year.

A revival also is underway in the Haynesville, “with 21% productivity improvements despite a 40% increase in wells drilled from 2016 to 2017,” the analysts said.

Gas IPs in the major U.S. regions should continue to strengthen, said analysts, with average well improvement estimated at 7%/year through 2018 and 4%/year through 2020.