Executives with Ultra Petroleum Corp. said the company has so far been unable to obtain relief on debt covenants from several of its creditors. It is working on forbearance agreements with some of them to allow more time to restructure its debt — all unsecured — which currently stands at $3.76 billion. 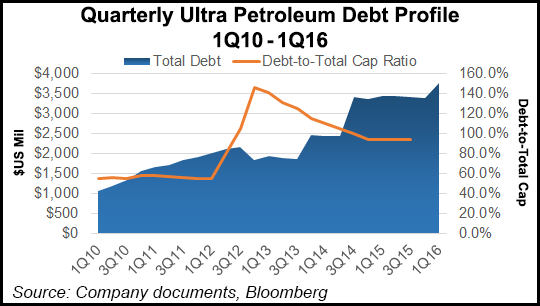 The Houston-based exploration and production (E&P) company also said that it recently borrowed the remaining $266 million from its $1 billion revolving credit facility. Ultra said its total debt obligations include $450 million of unsecured notes that are due in 2018, plus another $850 million due in 2024. Another $999 million is due under Ultra’s credit agreement and $1.46 billion issued by its subsidiary, Ultra Resources Inc.

During an earnings call Thursday, CEO Michael Watford said the company has been in discussions with its creditors since early in 4Q2015, but the efforts have so far been unsuccessful.

“Due to continued deterioration in our industry, we need to restructure our debt with our creditors providing concessions and discounts,” Watford said. He added that Ultra is “waiting on some sort of constructive reply…We’re in a unique position. It’s not all that pleasant, but we need some help from the creditors to get this thing across the finish line.”

When Watford was asked if the company was still in discussions with all of the operating company’s lenders, or if he would characterize the discussions as moving toward a prepackaged bankruptcy or an out-of-court exchange, the CEO replied, “Everything at this point in time is about out-of-court resolution of our credit issues.”

Watford added that a proposal Ultra made in early January to the operating company’s lenders “didn’t have [them] taking a haircut, but that’s hard to see that’s a realistic proposal anymore.”

Ultra’s stock plummeted on the news. After opening at 62 cents/share on the New York Stock Exchange on Thursday, it was down 36.6% (24 cents/share) to 41 cents/share by late afternoon.

Brad Johnson, senior vice president for operations, said Ultra drilled 50 wells during the fourth quarter, including 37 wells from its operating program that had an average cost of $2.75 million per well. He added that 4Q2015 was the fifth consecutive quarter that well costs had significantly declined.

Ultra plans to spend $260 million on capital expenditures (capex) in 2016, an amount 43.5% less than the $460 million it allocated for capex in 2015, although it ultimately wound up spending $494 million, an amount $59 million more than cash flow. The bulk of the capex budget for 2016, $239 million, will go toward drilling and completion costs in the Pinedale, with the remaining $13 million going to corporate expenses and $8 million for other purposes.

According to Ultra’s most recent presentation, as of September 2015 the company held 67,000 net acres in the Pinedale and Jonah gas fields in Wyoming. It also held 9,000 net acres in the Three Rivers area of the Uinta Basin in Utah, and 76,000 net acres in the Marcellus Shale in Pennsylvania, where it has an area of mutual interest with Anadarko Petroleum Corp. and an affiliate of Japan’s Mitsui & Co. Ltd. (see Shale Daily, May 8, 2012; Daily GPI, Feb. 17, 2010).

At the end of 2015, Ultra’s proved reserves totaled 2.53 Tcfe with a PV-10 (pre-tax estimated future net cash flows discounted at 10% value) of $1.87 billion. Both values are down significantly from 2014 due to falling commodity prices. The company added that due to uncertainty over financing the development of its proved undeveloped reserves (PUDs) over the next five years, all PUDs were transferred and booked in the probable category as of Dec. 31, 2015.