Houston-based Ultra Petroleum Corp. on Tuesday claimed more strong results from its natural gas-rich prospects in the Pinedale Anticline, while also divulging that chief Mike Watford will retire in February as part of a sweeping management overhaul. 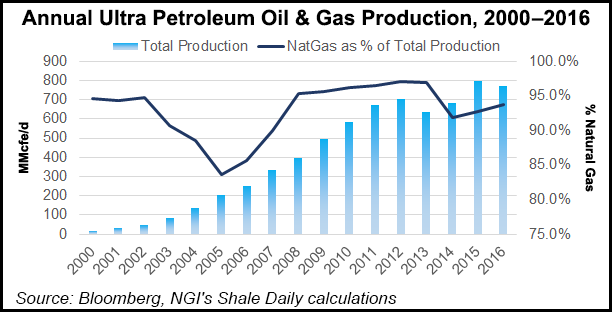 Senior Vice President (SVP) Brad Johnson, who has helmed operations since 2014, was tapped as interim CEO to replace Watford, who has served as chairman and CEO for 19 years.

“Given our successful emergence from the reorganization process almost a year ago, and following the recent success of the horizontal program, Ultra Petroleum is very well positioned, and I believe now is the right time to make the transition to new leadership,” Watford said.

Speaking for the board, director Steve McDaniel noted that Watford had made “significant contributions in building Ultra Petroleum and its core asset, the Pinedale Anticline, into a world-class going concern with a bright future. Mike has developed a deep bench of executives, including Brad, who are more than capable of taking Ultra Petroleum to the next level.”

Prior to joining Ultra, Watford was CEO of Nuevo Energy Co. from 1994-1998, where he led the growth in market value to more than $1 billion from $200 million. Watford was chairman of the Independent Petroleum Association of America from 2013-2015 and previously served on the board of America’s Natural Gas Alliance and the National Petroleum Council, an advisory committee to the Secretary of Energy.

Johnson joined Ultra in 2008 as the director of reservoir engineering and planning. In 2011, he became vice president, and since April 2014 has served as SVP of operations, where he has been responsible for geosciences, drilling/completion, production, construction, reservoir engineering, regulatory, environmental, safety and corporate engineering. Before joining Ultra, Johnson worked for Anadarko Petroleum Corp. for 13 years.

As part of the overhaul, two board members are stepping aside to make way for two new ones. Under a cooperation agreement with Fir Tree Partners, the largest shareholder with a 20% stake, Fir Tree partner Evan Lederman, is to join the board. Another independent director is to be named at a later date. Directors W. Charles Helton and Roger A. Brown plan to resign.

The personnel moves nearly buried an update on Pinedale operations, where Ultra again boasted of strong horizontal well results in the Green River Basin, today a major focus. Ultra has assets in the Pinedale and Jonah fields, as well as in the Utah’s Uinta Basin.

Among the highlights is the Warbonnet (WB) 9-23 M-1H well on the eastern flank of the Pinedale, which is Ultra’s first horizontal well to target the Mesaverde formation. The initial production (IP) rate was 17 MMcfe/d, 10% condensate.

The one-mile lateral in the M-1H was drilled to a total measured depth (TMD) of 19,115 feet, about half the lateral length of the recently announced WB 9-23 A1H. With an average true vertical depth of 13,566 feet and estimated bottom-hole pressures of 11,400 psi, the resulting pressure gradient of 0.84 psi/foot “is the highest among producing intervals in Pinedale,” according to management.

“The initial results of this well confirm the horizontal potential of the Mesaverde interval,” Johnson said. “We were expecting higher pressures and higher porosities in the Mesaverde and that is exactly what we encountered.”

To date, Ultra has completed three horizontals on the eastern flank, each one targeting different intervals. Each well has verified “the significant resource potential beyond the previous commercial boundary of the Pinedale Anticline,” he said.

Ultra has also drilled and cased the WB 9-23 A-2H, an 11,000-foot lateral in the Lower Lance A interval, which encountered “significant gas shows” and a net-to-gross sand percentage of 78%. The A-2H was drilled about half a mile north of the WB 9-23-A1H, which during 3Q2017 posted an IP rate of 51 MMcfe/d and cumulative volumes of more than 3 Bcfe in the first 90 days of production.

“The A-2H well targeted the same stratigraphic interval and was drilled to a total depth of 22,690-feet TMD,” management noted. “The spud-to-rig-release cycle time of 25 days was 7.5 days faster and the costs to date are $600,000 less than the costs to drill and case when compared to the A-1H well.” The A-2H is set to come online in February.

Ultra also is using another rig to spud two more horizontal wells on the WB 8-25 pad, which also are to target the Lower Lance interval. Two-mile laterals are planned for the east flank of Pinedale, with one horizontal planned for February and one for March.

Fourth quarter results and the 2018 outlook are to be provided during a quarterly conference call scheduled for Feb. 28. The company said it was reaffirming its previous 4Q2017 production guidance of 75 Bcfe.