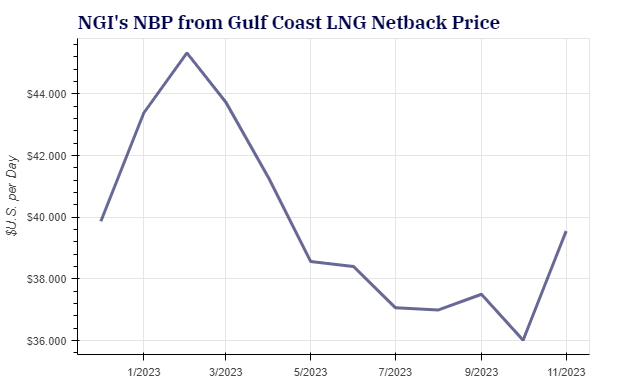 National Grid spokesperson Andrew Marsh told NGI the latest gas tender is “a 9% increase on what we have already and is to cover any potential shortfalls” in liquefied natural gas deliveries if more supply is needed. “But we don’t actually envision needing it at the moment.”  Bids were due earlier this month, but additional details were not available.

“We certainly need LNG to flow into the UK,” Marsh said. “But it is very unlikely we  will have a huge problem this winter. We’ve got diverse supplies from Norwegian fields in the North Sea and the UK Continental Shelf, and LNG, so we have a very good mix of supply for the UK.”

The UK has exported record volumes of gas to Europe since Russia invaded Ukraine in February. Since the UK has little storage capacity compared to other European nations, it typically has imported gas from Europe to help meet winter demand.

Chances of a gas shortage in the UK this winter prompted National Grid’s Electricity System Operator to publish contingency plans in its Winter Outlook. Under one scenario, there could be three-hour power blackouts imposed if supplies fail to meet demand.

“Gas imports from Europe vary from year to year, depending on the type of winter,” Marsh said. “During ‘normal’ winters, you would expect to see 15-20% of gas imports coming into the UK from European connectors. If we have an extreme winter, we still have positive supply margins but we would need LNG to be flowing into the UK…Wholesale prices are high, so it does mean we will have to pay more. “

The UK is now receiving LNG from Algeria, Angola, Nigeria, Peru, Trinidad and Tobago, Qatar and the United States. Russia had historically accounted for about 4% of UK supply.

Meanwhile, UK ministers are negotiating with Norway and Qatar for more long-term gas supplies. Negotiations with Norway’s Equinor SA are reportedly in an “advanced stage” and Norway is said to be eager to agree to a deal into the 2030s to support further gas investments in the North Sea.

To reduce future reliance on imports, UK Prime Minister Liz Truss in September ended a moratorium on unconventional natural gas extraction in England, claiming it could “get gas flowing in as soon as six months.” However, supply from unconventional gas wells would likely take several years to bring online, gas producers have said.

In addition, the first North Sea oil and gas licensing since 2019 has begun. Nearly 900 exploration blocks are on offer, with up to 100 licenses expected to be issued, the North Sea Transition Authority said.