The European natural gas market is finding refuge in Ukraine, where vast storage facilities are increasingly being utilized by traders, suppliers and utilities in a way that has helped to prevent prices from collapsing into negative territory amid a supply glut. 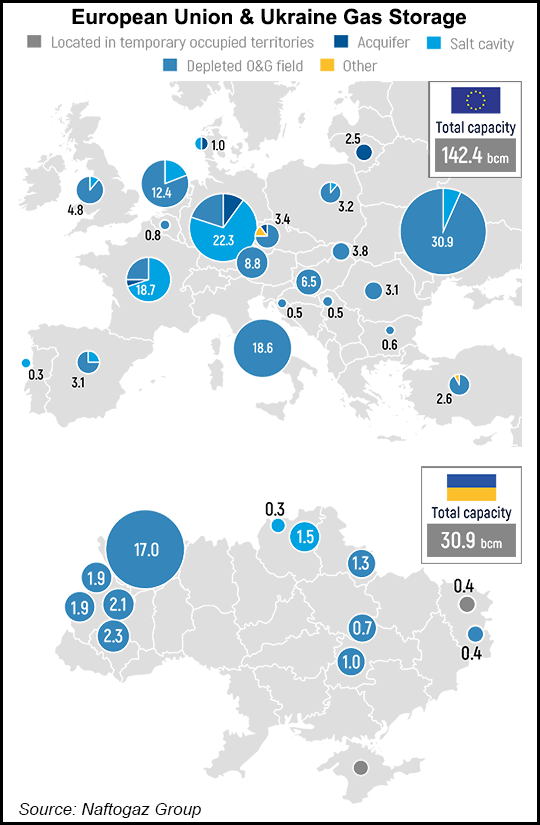 Ukrtransgaz, which manages storage and the country’s transmission system operator, has incentivized European traders in recent years to use Ukrainian storage with discounted transportation tariffs and exemptions from customs duties.

The incentives appear to be working. Ukraine’s storage facilities were filled to 62% of capacity on Monday, the latest date for which data was available. That’s compared to the previous five-year average of 39% and 35.9% at this time last year, when Ukraine built a cushion in anticipation of the expiration of a deal with Russia to move gas across the country.

Since the end of 2018, Europe has been flooded with natural gas supplies, namely liquefied natural gas (LNG) imports, which has accelerated storage injections across the rest of the continent. Two mild winters and the demand shock of Covid-19 have only exacerbated the situation and kept pressure on prices, which neared $1.00/MMBtu in May. Storage inventories on Monday were at 80% of capacity across the rest of Europe.

“This is really a way to have a fail safe in Europe in case storages fill up at the end of the injection season,” said Poten & Partners analyst Oleg Vukmanovic during a webinar last week. “European companies are taking proactive steps to make sure that doesn’t happen, by stashing as much gas in the Ukraine as possible to prevent a deeper price collapse at European hubs.”

While European storage is generally expected to fill before the winter heating season arrives, it could take a bit longer for that to happen given a series of factors that appear to be slowing the rate of injections, Vukmanovic said. Canceled U.S. LNG cargoes that were scheduled to arrive in Europe this summer and production turndowns from other countries, along with a recovery in gas-fired power demand and more volumes headed to Ukraine have helped to clear the market and restore some balance in supply and demand.

Ukraine has the largest storage capacity in Europe, with space for nearly 31 Bcm of natural gas. It has also marketed its capacity to countries farther west as Russian gas deliveries to Europe have dropped and its dependency on Russian supplies has declined. If the rest of the continent continues to utilize that capacity at current rates, it “could also hasten the integration of the Ukrainian and European gas markets,” said research fellows Mike Fulwood and Jack Sharples of the Oxford Institute for Energy Studies.

“Before Ukraine was importing a lot of gas from Russia, but once they reduced their consumption of Russian gas, they started having more interconnection with European countries, more interplay with European traders, so that has definitely increased the usage of Ukrainian storage,” said Rystad Energy’s Carlos Torres Diaz, head of gas and power markets.

Fulwood and Sharples wrote in May that Ukraine would only need roughly 2 Bcm of additional storage capacity to meet domestic demand this winter. As a result, UK consultancy Timera Energy noted last month that European shippers and traders could then flow up to 10 Bcm to Ukraine for injection this summer.

Still, the Ukrainian relief valve is not likely to hasten the return of U.S. LNG imports to the continent as it remains uneconomic to move cargoes across the Atlantic at current prices until at least the fall.

“I don’t expect any real comeback in big use of LNG imports until the weather starts getting colder after September,” Torres Diaz told NGI.

For now, European suppliers are selling more gas into the forward market, which is fetching a premium compared to prompt prices.

Pushing gas farther east toward Ukraine is not without risk.

Ukrtransgaz warned last week that it would need to conduct unexpected maintenance from August through October on the Budnice interconnection, a critical outlet for moving gas from Slovakia to Ukraine. The work threatened to stop flows completely. However, Slovakia’s system operator Eustream said Monday it would offer capacity at another exit point, alleviating the maintenance constraint, albeit at an additional cost for traders that have already booked capacity on Ukraine’s system.

While Ukraine has large storage facilities,  the country’s capacity to physically import volumes through its western borders is still limited. West-to-east imports have only been developed in the last six years or so as Ukraine has sought alternatives to Russian imports, Fulwood and Sharples noted.

“Europe has come a long way in improving its pipeline connections over recent years, particularly as west-to-east flows became a necessity after the start of the Ukraine/Russia tensions in the middle of the last decade,” Waddell told NGI. “This means it is not so problematic storing gas in any part of the European grid.”