Ukraine’s transmission system operator (GTSOU) said Thursday natural gas exports from the country would be halted to conserve domestic supplies as fighting with Russia raged on, casting another specter over Europe’s energy markets. 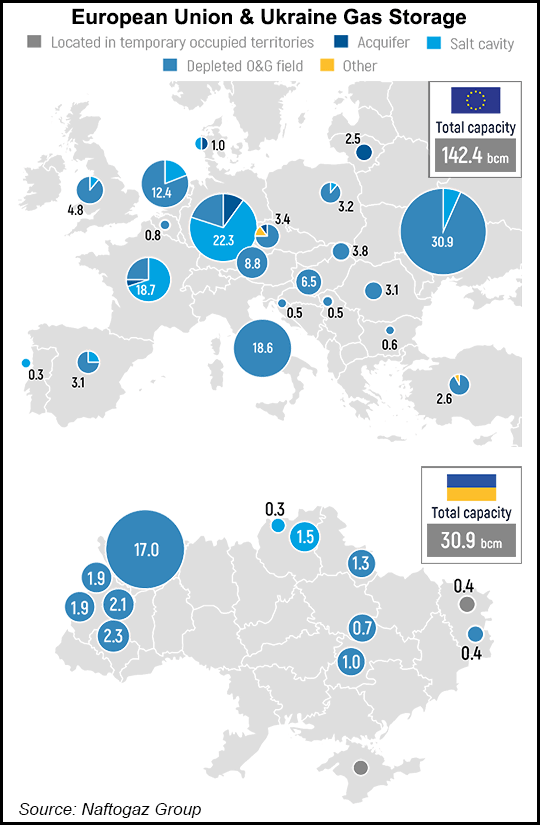 The decision does not impact international transit, meaning Russian gas supplies moving through Ukraine toward Europe would be allowed to continue. Market participants were instructed not to export gas from Ukraine’s territory, including from storage inventories starting with the March 4 (Friday) gas day. The move was not expected to have an impact on European supplies as volumes from Ukraine are not a significant gas source for the continent.

The emergency declaration, however, created yet another element of uncertainty for a global gas market fixated on the war in Ukraine. The conflict continued to pose risks for European supplies, especially if Russian energy exports are sanctioned or key Ukrainian infrastructure is damaged.

GTSOU said Thursday a pipeline in the Luhansk region was damaged, forcing staff to cut off flows. The operator said it would resume operations as soon as possible, but stressed fighting was occurring in the area. GTSOU also said Wednesday an air strike damaged two strings of gas line in the Kharkiv region.

The operator’s administrative buildings were also hit by artillery shelling on Wednesday, and the Ukraininan energy exchange was reportedly hit by a bomb on Thursday.

The hostilities haven’t impacted major transit lines, but GTSOU said it had been forced to shut down 14 gas distribution systems across the country.

“Russia’s aggression against Ukraine has led to extraordinary and unprecedented conditions and restrictions when all energy companies must focus on maintaining the natural gas supply for Ukraine and Ukrainians,” GTSOU said Thursday after it halted exports.

Amid a glut of natural gas two years ago, European traders took advantage of Ukraine’s vast storage capacity to ensure inventories on the rest of the continent did not overfill and send prices spiraling. Ukraine has the largest gas storage capacity in Europe, with space for nearly 31 billion cubic meters. The country also imports natural gas from Europe via reverse flows as it has looked to cut its dependency on Russian gas in recent years.

Europe relies on Russia for about one-third of its gas supplies and a portion of that gas moves through Ukraine. Russian spot deliveries to the continent have been weak in recent months, particularly through Ukraine, but ramped up with the start of fighting.

“It’s true that significant storage stocks in the country were used by European traders, however, most of these stocks have already been used either as exports to Europe, or more likely used locally in the Ukrainian market itself,” Wood Mackenzie analyst Graham Freedman told NGI. “Ukraine storage reserves are currently very close to the five-year average, so I suspect that the amount of gas held by European traders in Ukraine is negligible.”

According to NGI data, Ukrainian storage inventories were at 17% of capacity this week. Freedman said Ukraine has been importing gas from Europe since the beginning of February, but the country is not likely in a position to export any volumes to Europe until this summer.

European inventories are short themselves, which has cast a light on the continent’s dependence on Russia for supplies. That’s prompted other countries, such as the United States, to step up liquefied natural gas deliveries to Europe as prices have jumped sharply and attracted more cargoes since late last year.

While Russian flows to Europe have been strong since the attack began last week, the market has largely ignored everything but the war’s ongoing threat to supplies or the possibility of additional sanctions that could upend the energy market further.

“Russia’s invasion of Ukraine continues to overshadow all other drivers across the European energy complex,” Schneider Electric analyst Rauhan Nazir said in a note to clients Thursday. “Risks around Russian gas exports to EU markets continue to provide strong upside potential for forward gas and power prices, with gas flows, risk of more direct sanctions and negotiations on a possible ceasefire remaining the top drivers to watch.”

Volatility continued on Thursday. The Title Transfer Facility followed Brent crude lower and broke a two-day rally. There were wild swings, however, during trading as the prompt TTF contract hit a record intraday high of nearly 200 euros/MWh, or roughly $65/MMBtu. The contract ultimately went on to shed about $2 to finish near $52.

Another volatile stretch was likely Friday. Russia was said to have taken control of Kherson in the south of Ukraine and was reportedly gaining ground in other parts of the region as attacks intensified. Russian President Vladimir Putin also reportedly told French President Emmanuel Macron in a phone call that Russia would achieve its goal in Ukraine “no matter what.”

Meanwhile, another round of talks between Russia and Ukraine achieved little progress Thursday.