In the midst of a 100-day-plus war, Ukraine is preparing for the next heating season with proposed plans to secure large volumes of liquified natural gas (LNG) from the United States. 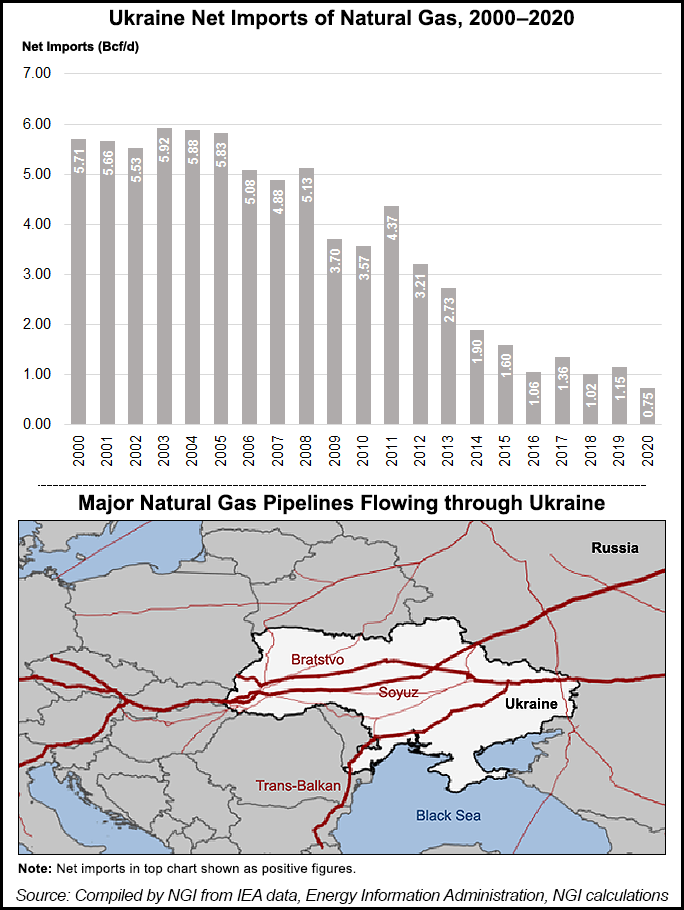 Ukraine’s President Volodymyr Zelensky said the government has begun solidifying plans for winter storage and boosting electricity production. Ukraine also plans to end all natural gas and coal exports to reserve supplies for “the internal needs of our citizens,” he said.

“Whatever the occupiers plan for themselves, we must prepare for the next winter – in our state, on our land, for all citizens,” Zelensky said.

Ukraine’s gas transmission system operator (GTSOU) made a similar call on gas exports in March. However, it had little impact on European supplies since the country only has minimal energy resources. Ukraine consumed around 1 trillion cubic feet of gas in 2019, according to the Energy Information Administration. It met about 70% of its natural gas demand with domestic production and Russian imports made up most of the remainder. Ukraine stopped direct imports of gas from Russia in 2014.

The announcement came shortly after Naftogaz of Ukraine was directed to restock national reserves with at least 19 billion cubic meters (Bcm) of natural gas before the next heating season. Prime Minister Denys Shmyhal reported the country had 10 Bcm in underground storage at the beginning of the month.

Naftogaz CEO Yuriy Vitrenko testified before the U.S. Congress that Ukraine will likely have to rely on the United States to help import 6 Bcm of LNG, worth roughly $8 billion at the current market prices.

“That is a big challenge now for Ukraine in the moment, but we are working now with the U.S. government about finding ways,” Vitrenko said. He pointed to “export financing, guarantees and even considering such an option as using gas as a lend-lease that Congress approved.”

Ukraine’s plans build on preparations begun last year in the face of Russian aggression on its borders. Natural gas markets have grown more volatile since the February invasion. Both European allies and LNG buyers in Asia have been competing for gas supply mostly from the United States and Qatar over Russia, driving prices higher.

GTSOU on Wednesday issued plans to collaborate with European partners on connectivity to the international LNG market. GTSOU spokesperson Olga Bielkova said Ukraine seeks access to gas imports from at least 10 established or developing regasification terminals in Europe. That would be in exchange for access to underground storage and “gas transit over short distances” in Central and Eastern Europe.

“In the long term, Ukrainian suppliers are interested in the LNG market, as opposed to the spot market, to diversify gas sources,” Bielkova said.

Vitrenko also used the appearance in Washington, DC, to advocate for further sanctions on Russia, including the Nord Stream 1 pipeline. Germany has already pulled authorization for the developing Nord Stream 2 pipeline, majority owned by Russia’s PJSC Gazprom. However, Russian gas is still flowing west in a limited capacity through Nord Stream 1.

Transit of Russian gas through Ukraine has been diminished since May after a critical compressor station on the southeastern border was placed out of service because of the conflict. Russia provided 31% of Europe’s natural gas imports last year, according to the Oxford Institute of Energy Studies (OIES). About 22% of the 168.7 Bcm that Russia sent to Europe last year went through Ukraine.

The European Union (EU) and Western allies have dealt a blow to Russia by reducing dependency on its commodities, Vitrenko said. However, the sanctions leave openings for the country to use its remaining exports to fuel the war.

“Even though volumes of exports are falling because of the EU actions, record high global prices more than compensate for the volume decreases…,” Vitrenko said.

Ukraine is also tooling its near-term energy plans to strengthen its relationship with allies and weaken Russia’s energy position in the long-term, according to the government. As it targets strategic repairs for its electricity grid, Zelensky said increasing its ability to export electricity will help maintain the country’s economy.

It will “also directly influence the stabilization of the energy situation in neighboring countries, which reduces Russian energy consumption,” Zelensky said.