Roughly one year after its first cryogenic and fractionation plants came online, the sprawling Utica East Ohio (UEO) midstream complex, with facilities that stretch from Columbiana to Harrison counties, OH, said Monday that it would respond to producer demand and increase its processing capacity from 800 MMcf/d to more than 1 Bcf/d. 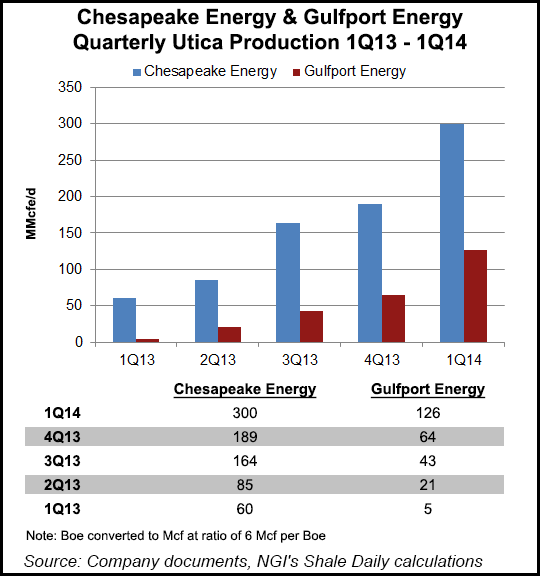 UEO, a joint venture between Access Midstream Partners LP, M3 Midstream LLC and EV Energy Partners LP (Evep), was first announced in March 2012 to serve a handful of producers operating in the heart of the Utica Shale’s wet gas window. On Monday, Access, which made the formal announcement, said the complex needed to add additional capacity in order to meet new commitments from its existing customers.

The expansion would include the construction of a second processing train at UEO’s Leesville facility in Carroll County, OH, and the extension of an existing high pressure pipeline from the complex’s Harrison Hub to a compression facility in Harrison County, OH, giving UEO a deeper reach into that county.

“Our investment in this expansion at UEO underscores our belief in the long-term viability of the Utica Shale,” said Access CEO Mike Stice. “This growth not only significantly increases our capacity but will improve access to downstream liquids markets.”

During a call to discuss first quarter earnings results with financial analysts on Monday, Evep Executive Chairman John Walker said the partnership had an interest in more than 200 wells in the area that couldn’t be turned in-line because of a lack of processing. He said the UEO expansion would help alleviate that backlog. He added that UEO remains “extremely satisfied with [its] operators at the moment and their ability to keep these projects on time, on budget and operating at high levels.”

UEO’s move comes one week after MarkWest Energy Partners LP said it would add another 400 MMcf/d of wet gas processing capacity in the Appalachian Basin at two of its facilities in West Virginia, citing requests from producers who needed more (see Shale Daily, May 7).