The U.S. rig count inched higher during the week ended Friday (Sept. 30), picking up one unit to end at 765 thanks to a small overall gain in the oil patch, according to the latest figures from Baker Hughes Co. (BKR). 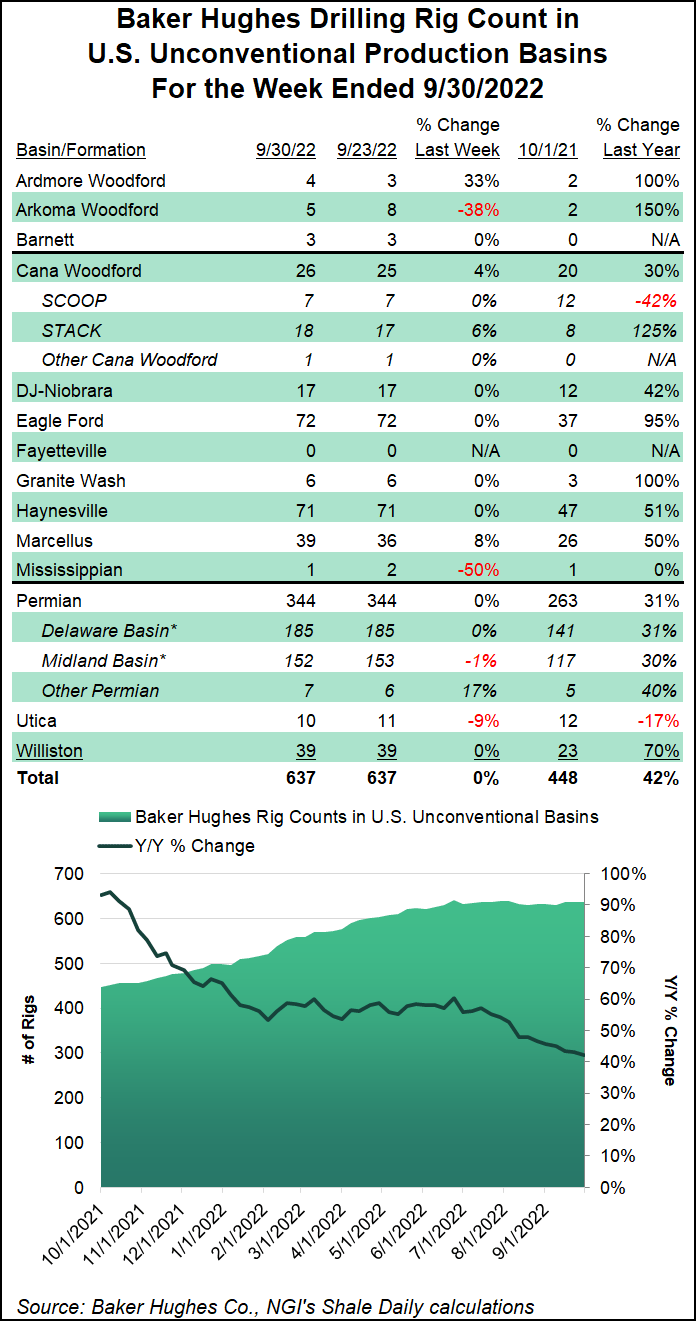 Two oil-directed rigs were added in the United States for the week. Partially offsetting was a one-rig decline in natural gas-directed drilling. The 765 active U.S. rigs as of Friday compares with 528 rigs running in the year-earlier period, according to the BKR numbers, which are partly based on data from Enverus.

One rig was added on land week/week, while the Gulf of Mexico tally went unchanged at 15. Three horizontal rigs were added domestically, while total vertical rigs declined by two.

The Canadian rig count fell two units to 213 for the week. Changes there included a four-rig decline in oil-directed rigs, partially offset by a two-rig increase in natural gas drilling.

Counting by major drilling region, the Marcellus Shale led with an increase of three rigs for the period, while three rigs exited in the Arkoma Woodford, the BKR data show. The Ardmore Woodford and Cana Woodford each added one rig, while the Mississippian Lime and Utica Shale each saw one rig exit for the period.

Counting by state, West Virginia saw a net increase of four rigs, while New Mexico added two and North Dakota added one. Texas dropped two rigs week/week, while Ohio, Oklahoma and Pennsylvania each dropped one, according to BKR.

Oil and natural gas activity in the Permian and in the Eagle Ford and Haynesville shales expanded at a steady clip during the third quarter, but the pace decelerated from the record-breaking second quarter, the Federal Reserve Bank of Dallas said recently.

The Dallas Fed, as it is known, collected 3Q2022 data from Sept. 14-22 from 163 energy firms headquartered in Louisiana, New Mexico and Texas. The quarterly polls for the Dallas Fed’s Eleventh District gauge activity trends and price forecasts from oilfield services and exploration and production executives.