When it comes to commodity prices, there hasn’t been much for drillers to get excited about recently, but that didn’t stop the United States from adding 12 rigs for the week ending July 7, according to data published Friday by Baker Hughes, a GE Company (BHGE). 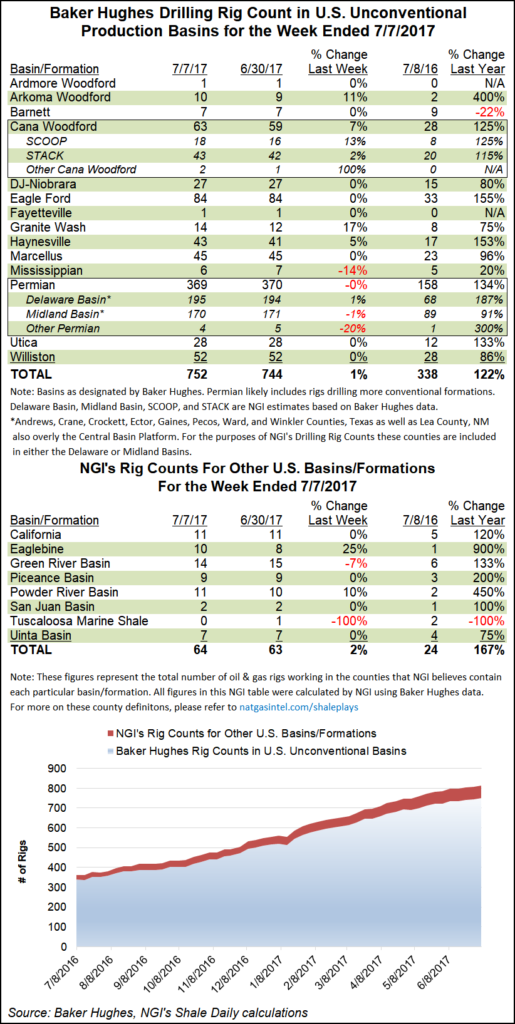 U.S. drillers added seven oil-directed rigs and five gas-directed rigs for the week, bringing the U.S. tally to 952, more than double the year-ago total of 440.

Canada moved the other way, giving up 14 rigs for the week, seven gas-directed, seven drilling for oil.

North America lost two rigs overall, finishing the week with 1,127, compared with 521 in the year-ago period, according to BHGE.

The biggest weekly gainers among states were Oklahoma and Alaska. Oklahoma, home to overlapping stacked targets in the SCOOP (aka, the South Central Oklahoma Oil Province) and the STACK (the Sooner Trend of the Anadarko Basin, mostly in Canadian and Kingfisher counties), added four rigs for the week to finish at 136. Alaska, meanwhile, managed to double its rig count in just a week, adding four rigs to end the week at eight, according to BHGE.

The Haynesville, located in Louisiana and East Texas, added two rigs for the week to finish at 43, good for a week/week increase of 5%.

The Appalachian Basin held flat, with the Marcellus (45) and Utica (28) shales maintaining their year/year gains.

The Permian Basin, the U.S. onshore’s most active crude oil play, gave up a rig for the week and finished at 369, which still represents a 134% increase from its year-ago tally of 158.

The weekly U.S. rig gains come as somewhat of a surprise given recent commodity price action.

Disappointing cooling loads have put a damper on the plus-$3 natural gas futures traded in the lead-up to summer.

A plump natural gas storage report from the Energy Information Administration (EIA) — released Friday, a day later than usual due to the Fourth of July holiday — offered more food for the bears. EIA reported a net injection of 72 Bcf, more than what analysts were expecting, and the Nymex August Henry Hub contract settled down about 2 cents Friday at $2.864.

Crude oil prices have shown a downward trend the last several months. Nymex futures have hovered in the mid-$40s/bbl, leaving drillers to long for the plus-$50 conditions from earlier this year.

“The 12 rig increase this week nearly matches the 13-rig net increase over the previous three weeks, but I don’t think this represents a sudden increase in bullish sentiment from the industry,” NGI Director of Strategy & Research Patrick Rau said. “This week’s rig gain was skewed higher by an atypical four rig increase in Alaska, with most of the remaining increases coming from four more rigs in the STACK/SCOOP and another two in the Haynesville. Those are likely more indicative of regional and/or company specific decisions than from a general increase in industry activity.”

As more economic plays like the Permian and the SCOOP/STACK make up a bigger chunk of the total rig count, trends in overall drilling activity are starting to show a little less price sensitivity, Rau said.

“It is somewhat surprising that the U.S. rig count continues to tick higher, but typically there is a lag between oil — and to a lesser extent, gas — prices turning lower and the rig count contracting. However, I believe the lag time is more pronounced these days, since a greater percentage of the working drilling rig count is in the lower-cost Permian and STACK/SCOOP,” Rau said.

“Two years ago, those two basins accounted for roughly 30% of the total rig count, but today, they house nearly half of the working U.S. rig fleet. Both basins are largely economic at $40-$45 West Texas Intermediate, and will likely continue to be so this year, unless oil service prices really get out of hand. That should keep the overall U.S. rig count from falling too far too fast, everything else being equal, and, of course, assuming $40-plus crude oil.”