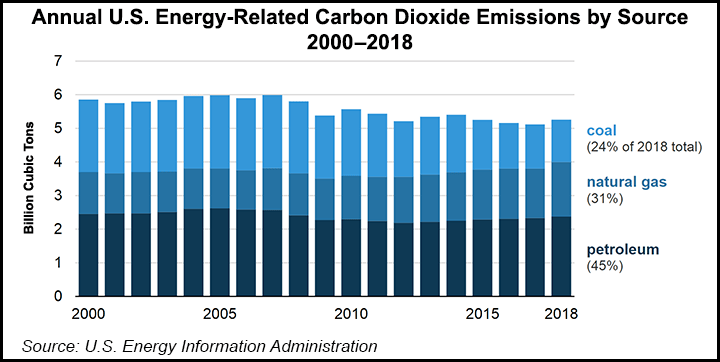 A major U.S. business trade association, whose CEOs include some of the biggest oil and gas operators, is calling for a market-based solution to help curb carbon emissions, including imposing a carbon tax.

The Business Roundtable is made up of CEOs from companies with total annual revenues of around $7 trillion. While they did not recommend a particular market-based design to reduce emissions, pricing carbon could reduce emissions because “a clear price signal is the most important consideration for encouraging innovation, driving efficiency and ensuring sustained environmental and economic effectiveness.”

Warning of threats posed to the country from climate change, the CEOs said, “It’s time for a new approach.” Progress has been made to reduce greenhouse gas (GHG) emissions but there continues to be uncertainty because of the patchwork of federal and state efforts.

“This approach would reduce the administrative complexity and uncertainty associated with a regulatory approach to limiting emissions and help ensure that U.S. companies remain competitive,” members said. “It would also send an important market signal that would lead to greater efficiency; technological innovation; and deployment of the low-, no- and negative-GHG emissions technologies that will be necessary for reducing GHG emissions by at least 80% by 2050.”

Walmart CEO Doug McMillon, chairman of the Roundtable, said climate change is “one of the greatest challenges facing the planet today, and we believe businesses are an essential part of the solution.

“Representing more than 200 CEOs from America’s leading companies, the new Business Roundtable position on climate change reflects our belief that a national market-based emissions reduction policy is critical to reducing greenhouse gas emissions to levels designed to avoid the worst effects and mitigate the impacts of climate change.”

Oil and gas CEOs in the Roundtable include BP plc’s Bernard Looney, who last week laid out an aggressive plan for the London-based super major to reach net zero emissions by 2050.

“We are committed to leading by example,” said Lance. “The U.S. can do the same by adopting a credible, durable and comprehensive climate change strategy with market-based solutions to reduce emissions across the economy while increasing adaptation, resilience and regulatory simplification.”