Global liquefied natural gas (LNG) supplies are expected to rise by 43 million metric tons/year (mmty) this summer with the United States in the lead, according to Goldman Sachs Group Inc. 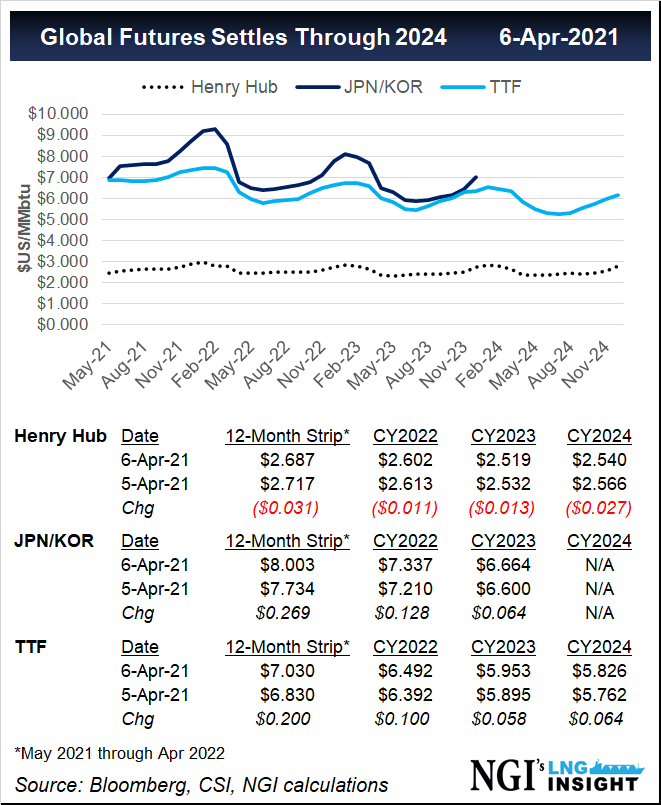 The investment bank’s analysts projected domestic LNG exports could grow by 35 mmty this summer from 2020 levels, as flows normalize. By comparison, leading LNG exporters Qatar and Australia are each expected to expand their takeaway by less than 5 mmty, according to analysts at Goldman Sachs Commodities Research led by Samantha Dart.

U.S. LNG exporters are ramping up output, with several producers operating above nameplate capacity. In a recent note, EBW Analytics Group said domestic feed gas demand has averaged 11.6 Bcf/d over the past three weeks, 2.7 Bcf/d higher than a year ago and “replacing a period of volatility just several months ago with steady, elevated demand.” It is a stark contrast compared with a year ago, when demand sank to 7.9 Bcf/d in the second half of April from 8.7 Bcf/d in the first half of the month.

Shorter term, Goldman said U.S. LNG deliveries to Asia have dropped significantly since February because of a negative Japan-Korea Marker (JKM) premium to the Title Transfer Facility (TTF) benchmark. The pricing resulted in a 51 mmty drop in total deliveries to the region in March, according to analysts.

“This has in turn supported a $1.49 rally in JKM to above $7/MMBtu over the past four weeks, widening its premium to TTF to plus 49 cents from minus 3 cents in the same period,” Goldman said.

The Goldman analysts raised their forecast for summer deliveries to Europe by 7 mmty because of higher expected supply. However, they do not “see any meaningful downside risk to global gas prices. Even taking into account our softer LNG outlook for Europe, we estimate its storage path remains below average levels.”