Dakota Access LLC, operator of the eponymous crude oil conduit ensnared in a legal battle over its right to stay in operation after a federal judge vacated a critical easement, has asked the U.S. Supreme Court to weigh in on its case. 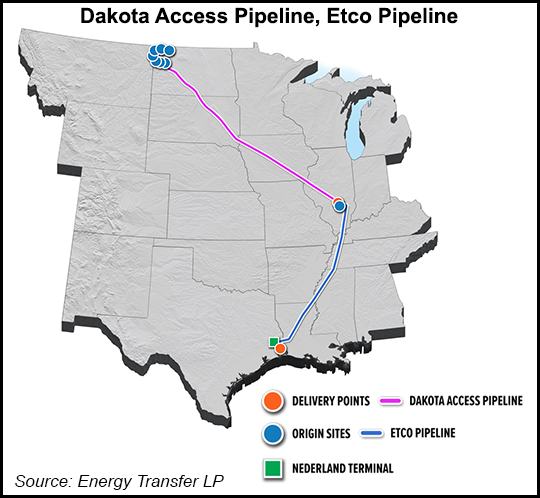 The questions presented by counsel representing the 1,172-mile Dakota Access Pipeline (DAPL) could have broader implications for energy infrastructure subject to review under the National Environmental Policy Act (NEPA), according to analysts.

In a petition for a writ of certiorari filed with the Supreme Court Monday, DAPL’s counsel presented two key questions to the court. First, they want the justices to determine whether NEPA requires “an agency that carefully considers all criticisms of its environmental analysis” to “also ‘resolve’ those criticisms to the court’s satisfaction to justify a finding of no significant impact.”

Second, DAPL asked for a ruling on “whether procedural error under NEPA” justifies vacating a project approval instead of merely requiring the agency to undergo further review to correct any deficiencies.

Last summer, Judge James Boasberg with the U.S. District Court for the District of Columbia ordered DAPL to temporarily shutter after determining that the U.S. Army Corps of Engineers should have prepared an environmental impact statement for the project. The environmental review specifically concerns the pipeline’s 1.73-mile crossing underneath Lake Oahe, the large reservoir created by the Oahe Dam on the Missouri River. Boasberg’s order was partially reversed on appeal, keeping oil flowing on the pipeline.

The Army Corps, which could enforce the Lake Oahe crossing easement that the court vacated, has appeared content not to act, in effect allowing DAPL to continue operating.

DAPL’s counsel in its petition to the Supreme Court argued that the pipeline, with its easement removed, remains vulnerable to a potential shutdown that “would precipitate serious economic and environmental consequences.”

The justices “should intervene to eliminate this uncertainty and…restore Dakota Access’ easement in order to ensure its continued operation and avoid the economic and environmental fallout of a shutdown.”

In a note to clients, ClearView Energy Partners LLC analysts said potential Army Corps action to shut down the pipeline appears “far less likely now than it was earlier this spring. That said, we think that the questions Dakota Access has now placed before the court have very broad ramifications for NEPA reviews in the energy sector, even if the justices decline to hear the case.”