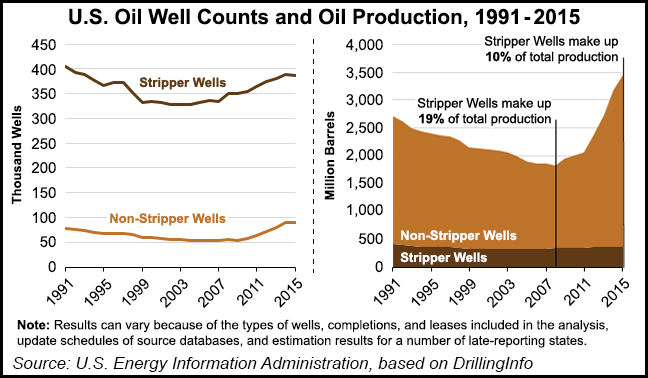 The stripper wells, aka marginal wells, so called because they strip the remaining oil and natural gas from the ground, typically produce up to 15 boe/d over a year’s time. At the end of 2015, there were around 380,000 domestic strippers, down by 19% from 2008, said the report overseen by principal contributor Jack Perrin. However, strippers still surpassed “nonstrippers,” which totaled about 90,000 at the end of last year.

Even though each stripper provides only a small amount of individual production, “their large number ensures a significant contribution to total oil production,” EIA noted. The production share of oil stripper wells has fallen, reflecting “the large increase of production volume from very prolific wells drilled in shale and tight oil formations with enhanced completion techniques.”

Unconventional wells, along with conventional onshore and offshore wells across the United States and in the Gulf of Mexico, “produce at a much higher rate than stripper wells, and thus account for a much larger percentage of total U.S. oil production.”

Wells become strippers through the normal decline of producing wells, some of which may have at one time been prolific. Strippers “usually have low ongoing maintenance costs and relatively low transportation costs to move their products to distribution systems,” EIA noted. “As long as these wells are economically feasible, they are kept active and may continue to produce for many years.”

In Texas, the owners of stripper wells became eligible for a tax break in March because of low crude prices. Stripper gas wells have been eligible for exemptions since May 2009.

The Texas Comptroller’s Office in March announced the 25% severance tax exemption for stripper oil wells the first time ever. Under Texas law, a 4.6% severance tax is imposed on the market value of oil produced at each well. However, in 2005, state lawmakers enacted a 25% exemption for wells producing less than 15 b/d when prices fall below a certain level for three months or longer, an incentive to keep marginal wells in production. If crude oil prices fall further over a prolonged period, the exemption may be increased incrementally for higher tax breaks.

New Mexico legislators in January were considering a tax break for stripper wells that would apply to an estimated 17,000 wells, each producing less than 10 b/d (see Shale Daily, Jan. 29). However, faced with a $1.3 billion budget shortfall, the Oklahoma legislature in May voted to cap the tax incentive for stripper wells, which was created in 2005. The rebates totaled as little as $11 million in 2014, but the cost to the state rose to $41 million during the current fiscal year and is expected to more than triple to $133 million in fiscal 2017, which begins Friday (July 1).

Stripper well operators face problems from the proposed federal oil and gas methane rules, according to the National Stripper Well Association (NSWA). The U.S. Environmental Protection Agency’s final methane rules were issued last month (see Shale Daily, May 12). The rules, combined with low oil prices, would cripple marginal well owners and operators, said the group, which had fought for an exemption that was eliminated.

“These new rules will cripple stripper and marginal well owners and operators, and on top of historically low oil prices, we are looking at total disaster,” said NSWA Chairwoman Darlene Wallace. “By requiring the addition of new costly equipment requirements and expensive leak detection the economics within the oil and gas industry as a whole will be fundamentally changed, severely and forever.”