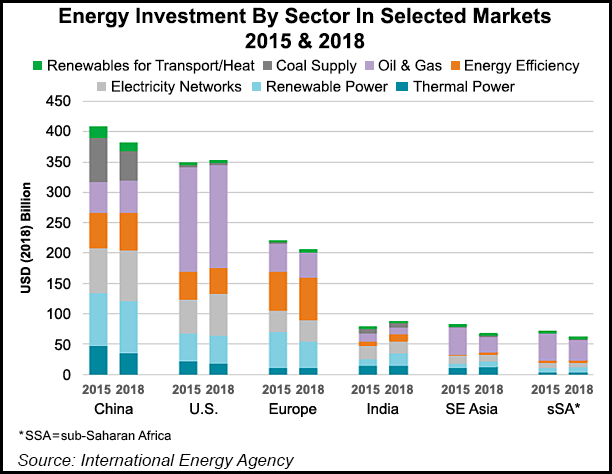 The global energy watchdog’s annual World Energy Investment 2019 signals a “growing mismatch” between overall spending trends and the path toward more sustainable development outlined in the 2015 United Nations climate accord, aka the Paris agreement.

Global energy investments last year totaled more than $1.8 trillion, similar to levels in 2017. For the third year in a row, the global power sector attracted more investments than the oil and gas industry.

“The biggest jump in overall energy investment was in the United States, where it was boosted by higher spending in upstream supply, particularly shale, but also electricity networks,” the researchers said. “The increase narrowed the gap between the United States and China, which remained the world’s largest investment destination.”

As energy investments stabilized, conventional oil and gas project approvals have fallen short of what IEA estimates is needed to match continued robust growth in global energy demand. In addition, few signs have emerged about a “substantial reallocation” of energy funds to efficiencies and “cleaner” supply sources.

“Energy investments now face unprecedented uncertainties, with shifts in markets, policies and technologies,” IEA Executive Director Fatih Birol said. “But the bottom line is that the world is not investing enough in traditional elements of supply to maintain today’s consumption patterns, nor is it investing enough in cleaner energy technologies to change course. Whichever way you look, we are storing up risks for the future.”

According to IEA, the world is witnessing an investment shift toward energy supply projects that have shorter lead times. For example, in power generation and the upstream sector, “the industry is bringing capacity to market more than 20% faster than at the beginning of the decade.”

Meanwhile, coal-fired power plant investments have fallen to their lowest level this century and retirements have risen. However, the global coal power fleet continued to expand last year, particularly in developing Asian countries.

“The continuing investments in coal plants, which have a long lifecycle, appear to be aimed at filling a growing gap between soaring demand for power and a leveling off of expected generation from low-carbon investments (renewables and nuclear),” IEA said.

Without carbon capture technology or incentives for earlier retirements, coal power and the carbon dioxide emissions it produces could remain part of the global energy system for many years to come, according to IEA.

“At the same time, to meet sustainability goals, investment in energy efficiency would need to accelerate while spending on renewable power doubles by 2030.”

Among the major countries and regions, India stood out as second only behind the United States in energy investments last year. Still, the poorest regions of the world, including sub-Saharan Africa, “face persistent financing risks,” as they received around 15% of investments last year but accounted for 40% of the global population.

“Far more capital needs to flow to the least developed countries in order to meet sustainable development goals,” according to researchers.

IEA also reported that public spending on energy research, development and demonstration (RD&D) is not meeting expectations. Public energy RD&D spending rose slightly in 2018, led by the United States and China, but the share of gross domestic product remained flat, as most countries are not spending more of their economic output on energy research.

“Current investment trends show the need for bolder decisions required to make the energy system more sustainable,” Birol said. “Government leadership is critical to reduce risks for investors in the emerging sectors that urgently need more capital to get the world on the right track.”