Hydraulic fracturing operations slowed considerably across the Lower 48 last year as the pandemic slammed the oilpatch, but proppant operators are seeing signs of a turnaround as their customers begin completing wells. 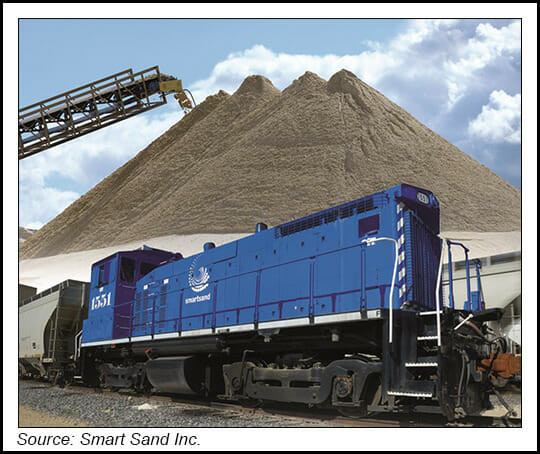 The management teams of U.S. Silica Holdings Inc. and Smart Sand Inc. recently held their fourth quarter conference calls, acknowledging the struggles through most of 2020. However, in the final three months, business began to pick up, with momentum carrying into the first quarter.

During 4Q2020, U.S. Silica, one of the largest commercial sand and last-mile operators in the Lower 48, saw oil and gas proppant volumes increase 48% from 3Q2020. Loads also jumped 71% sequentially for the proppant storage, handling and well-site delivery unit SandBox Logistics.

“We’re experiencing a strong start to 2021, with surging proppant demand in January,” U.S. Silica CEO Bryan Shinn told analysts. “February started strong as well,” but it was negatively impacted by the “unprecedented cold weather,” which disrupted well operations in Texas and the Midcontinent.

“We did not suffer any major damage, and our operations and deliveries in these geographies are ramping back up. It’s too early to estimate the total impact, but I believe that we will lose several days of oil and gas sales in February to those basins and will incur increased operating, maintenance and start-up costs as well.”

“Regarding profitability impact, we expect to make up most of the lost profits later in 2021, as we believe that energy company completion spending will be redistributed throughout the year. Also, insurance claims will likely offset some of our increased expenses.

Shinn was asked during the call about whether the higher demand for sand proppant in hydraulic fracturing would lead to better incremental pricing, which could in turn bring back idled sand mines.

“It’s a really interesting question,” Shinn said. “If you look at what happened in the…downturn of 2020, you saw a lot of companies do exactly what we did, which was take some mines almost completely offline.”

Other operators reduced staffing levels. For example, Shinn said, a sand mine that could handle 1 million tons might have kept the mine open but at reduced levels with fewer people.

As strong demand has begun to return, some of the sand mines have been restaffed, which is “relatively easy to do,” Shinn said. For example, the West Texas mines in Crane and Lamesa, which serve Permian Basin operators, were able to restaff.

“I think we’ll hit a point here pretty soon where you can’t just sort of turn back up the mines that were turned down, and it will come to actually reactivating mines that have been shuttered,” he told analysts. “What we’ve seen out there actually so far is surprisingly, perhaps to some, a fair amount of discipline among the supplier base.”

Exploration and production (E&P) customers are looking for additional sand capacity, according to Shinn.

What U.S. Silica and other competitors are looking for are “long-term contracts at reasonable prices to restart mines. We’ve already gotten a lot of those contracts; others, perhaps, are to come. I feel like there’s a bit of discipline out there right now. And it certainly does take some incremental pricing to get those mines reactivated.”

To reactivate mines, though, costs money. “I think most people in the industry are looking for some incremental pricing to be able to do that,” Shinn said.

U.S. Silica gave some of its E&P customers pricing concessions in the second and third quarters of 2020, “and now I think we’re quickly coming to an environment in the first couple of quarters of 2021 where things have flipped a bit and we’re tightening up pretty substantially.”

If oil prices reach the $70s by this summer, “I feel like there’ll be some reasonable opportunities” to get sand prices higher.

U.S. Silica has an Oil & Gas division, as well as an Industrial and Specialty Products (ISP) segment. The company “obtained several new customer contracts” during 2020, Shinn said. He estimated that more than 50% of the ISP revenue and 90% of the Oil & Gas segment revenue is now under long-term contract.

The company, which owns several sand mines in the Lower 48, also is continuing to improve its manufacturing efficiencies.

“Plant costs are coming down,” Shinn noted. “Railcars in storage are 30% lower sequentially due to scheduled car returns, and we’re seeing increased capacity utilization of the cars as well.

“Looking ahead to 2021 and beyond, I see a minerals and technology company that is well positioned for sustainable long-term growth and significant free cash flow generation.”

The Oil & Gas segment is being repositioned, while the ISP division is set to expand. U.S. Silica is “right sizing proppant capacity and reducing costs to match current and expected demand from well completions.”

Capital expenditures (capex) in 2020 totaled $34.5 million, mainly related to growth projects in the ISP segment. There also was spending on equipment to expand the SandBox oil and gas operations. Within the Oil & Gas segment, revenue reached $120 million in 4Q2020, up 81% sequentially but down 49% year/year.

Smart Sand, headquartered in The Woodlands north of Houston, took advantage of the downturn last year to acquire the oil and gas proppants segment of Eagle Materials Inc. The transaction included mines and processing in Utica, IL, and New Auburn, WI.

Included in the transaction are about 3.5 million tons/year of processing capacity. Close to half of the capacity, 1.6 million tons, has access to the BNSF Class 1 rail line transload facility through Peru, IL.

The total net assets had a fair value of $41.7 million for total consideration of $2.1 million, which resulted in a “bargain purchase gain” of $39.6 million.

“This acquisition provides us incremental capacity to serve the market as it recovers and increased logistics capabilities through the access to another Class I railroad,” Young said. “We believe the acquisition, combined with existing low cost operations and our low leverage levels will allow us to continue to compete effectively in the market to provide sustainable sand supply and logistics solutions to our customers in 2021 and beyond.”

Smart Sand sold 612,000 tons of sand in 4Q2020, up 98% sequentially and 32% from a year earlier. Sales volumes also improved substantially because as oil prices improved, E&Ps picked up the drillbit once again.

For the year, Smart Sand sold 1.89 million tons of sand, down 23% from 2019. Volumes had dropped sharply in the second and third quarters before rebounding in the final three months.

During the final three months of 2020, Smart Sand generated $2 million in free cash flow, resulting in $3.3 million in cash flow from operations while spending $1.2 million on capex. Most of the capital spent during 2020 was directed to SmartPath transloaders used in the last-mile logistics fleets of SmartSystems.