U.S. Silica Holdings Inc., one of the largest commercial sand and last-mile operators in the Lower 48, is laying off 230 employees and idling two mines because of the “current challenges in the energy markets.” 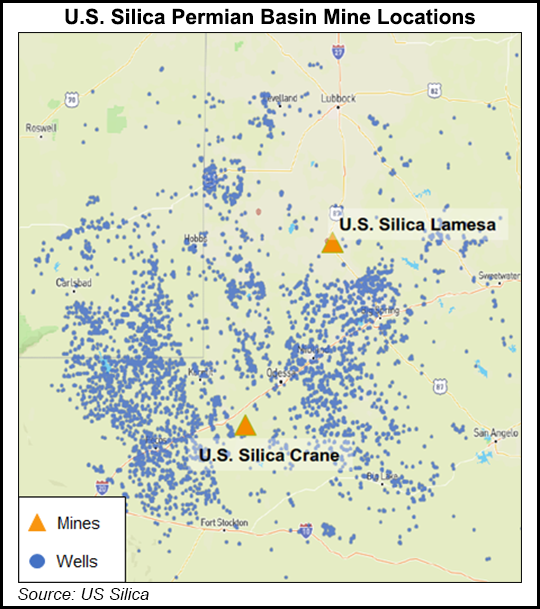 The company, headquartered near Houston in Katy, expects the job cuts, which are to impact about 10% of the entire workforce, will include corporate employees. The cuts are being made to “improve efficiencies and better align operations and support staffing” as it faces a sharp downturn in oil and gas industry activity.

“The actions taken realign our operational footprint and cost structure to more efficiently serve energy customers while simultaneously supporting the expected growth of our Industrials & Specialty Products segment,” which is separate from the oil and gas (O&G) business.

Expected annual savings from the job reductions are expected to total around $20 million a year.

U.S. Silica also is idling its mines in Utica, IL, and Tyler, TX, which serve the O&G segment. One mine to be “impacted” but not idled is in Crane County, TX, which serves Permian Basin operators.

Other plants to be impacted are in Sparta, WI, and Festus, MO. The company currently operates 27 mines and production facilities.

“The workforce reduction in operations will reduce staffed O&G capacity by 7 million tons, which will be better aligned with current demand,” management said.

U.S. Silica produces commercial silica for a wide range of industrial applications and for the oil and gas industry. Its subsidiaries include EP Minerals and SandBox Logistics, the proppant storage, handling and well-site delivery unit.

U.S. Silica, which had warned earlier this year of weakening conditions in the Lower 48 for the O&G business, reported a total net loss in 3Q2019 of $23.0 million (minus 31 cents/share), versus year-ago profits of $6.3 million (8 cents).

The company said it expects to incur around $1.7 million for severance costs for 4Q2019, and it may have additional charges.