U.S. Silica Holdings Inc., one of the largest sand providers in the onshore, reported double-digit growth for oil and gas volumes as more mining facilities opened in its largest service area, the Permian Basin. 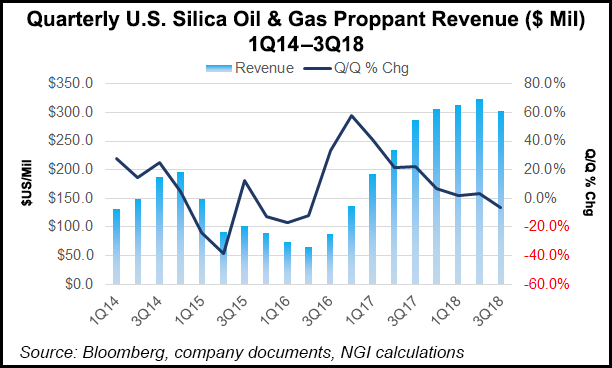 The company, headquartered near Houston in Katy, produces commercial silica used in the oil and gas industry, and in industrial applications. There were “headwinds” in the oil and gas sand business between July and September, but the oil and gas unit still delivered “one of the best quarters in company history,” CEO Bryan Shinn said Tuesday during a conference call to discuss results.

“While we did experience pricing pressure during the quarter on northern white sand and spot sales, our contracts held up well,” Shinn said.

The SandBox unit, the fracture sand logistics unit that manages the proppant supply chain, “averaged 82 crews during the quarter, and though we saw lower load volumes from the slowdown in completions activity, this decline was partially offset by higher profitability per load.”

Sandbox has a “strong pipeline of new work with recent contract awards from several operators for multiple crews planned to start in the next two quarters,” said the CEO. “We also have developed and launched several new innovative solutions to better serve our customers and grow the business.”

The outlook for the oil and gas business into 2019 is looking increasingly positive, Shinn said, as producers replenish their budgets and begin to reduce a record onshore number of drilled but uncompleted (DUC) wells.

“Taking a step back and looking at oil and gas macro, we continue to see strong demand for sand, driven by the secular trend of longer laterals, tighter spacing and more proppants per foot, resulting in more proppant per well,” Shinn said. “We’re currently forecasting 110 million tons of industry demand in 2018 increasing to 130 million tons in 2019. This is opposite an outlook of 150 million to 155 million tons of effective capacity in 2019.”

Through the rest of this year, however, U.S. Silica is likely to see “more white space on our customers’ calendars,” but “these near-term challenges are transitory. Budgets will reset in 2019, takeaway capacity will be expanded and the record inventory of DUCs will begin to be completed, all of which should provide positive catalysts for sand and logistics demand.”

The oil and gas business is “evolving rapidly,” Shinn said. Local, i.e. in-basin, sand capacity, which improves last-mile logistics, “continues to come online with most of the capacity additions in the Permian so far. We’re also seeing local sand projects in other basins, with varying degrees of market acceptance.”

U.S. Silica is forecasting that as much as 12-14 million tons of new capacity “could eventually come online outside the Permian, mostly in South Texas and the Midcontinent,” Shinn said. “We do, however, expect that many of our customers will continue to want to pump northern white sand in these basins as well as other geographies,” including the Bakken Shale, Rockies and in the Northeast.

“That said, incremental local capacity will pressure northern white sales volumes and margins,” which the company experienced in 3Q2018. “As more local mines come online, we expect that higher cost northern white mines will be closed.

“We’ve already seen more than 12 million tons per year of idle capacity. We believe that another 10 million to 15 million tons of nonlocal capacity may come off line in the next few quarters.”

About 70% of U.S. Silica’s current capacity is in-basin, and it should benefit from the decline in northern white demand, Shinn said.

In the third quarter, for example, less than 33% of the contribution margin came from northern white sales. U.S. Silica now expects to triple its Permian capacity by the end of March once the Crane and Lamesa mines ramp up in West Texas.

Many E&Ps have begun “direct sourcing sand to assure supply and reduce completion cost,” Shinn noted. “This is a disruptive change, as these customers are more focused on product quality, supplier safety and reliability, as well as delivered cost. They are also more likely to sign longer term contracts, those that are aligned with their long-term drilling plans…”

In addition, these E&Ps “generally prefer that the sand provider manages both sand and logistics all the way to the blender,” he said, which means offering last-mile solutions like SandBox should benefit.

The latest results were negatively impacted by $8.3 million (8 cents/share) in merger and acquisition expenses, including the $750 million purchase of EP Minerals, as well as $25 million (25 cents) for plant startup/expansion expenses, $1.9 million (2 cents) for business optimization projects and $1.5 million (1 cent) in other adjustments.

Specifically for the oil and sand business, revenue increased 6% year/year but fell 7% sequentially to $302.5 million. Total revenue was $423 million, down 1% sequentially, but 23% higher year/year.