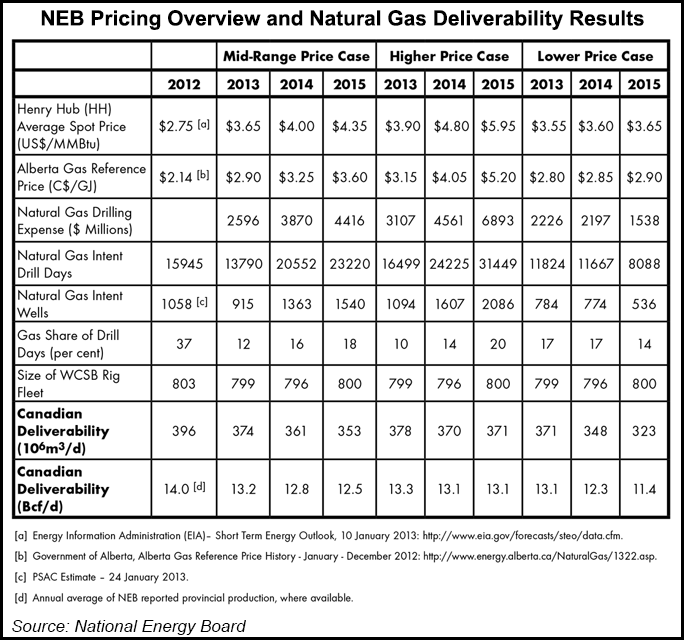 In the just-released report, “Short Term Natural Gas Deliverability 2013-2015,” the Canadian independent federal regulator found that Canadian natural gas appears to be in a “holding pattern” due to low prices, aided by U.S. production, which continues to keep the North American natural gas market “well supplied.”

Further, the board found that Canadian and U.S. producers that switched away from developing dry gas to earn higher returns by developing oil and natural gas liquids (NGL)-rich prospects appear to be producing enough natural gas as a byproduct to extend this period of abundant North American gas deliverability. In addition, the growth in NGL supply has reduced NGL prices and is “eroding some of the incentive behind drilling for wet gas.”

The NEB said Canadian producers “are not earning sufficient returns to attract additional equity investment” with current prices of around $3.00/MMBtu in Western Canada. The board projects annual Canadian natural gas prices could be C$3.60/gigajoule by 2015 and sustain drilling for NGL-rich gas and incentivise the beginnings of some return to dry gas drilling. Canadian natural gas deliverability would fall to 12.5 Bcf/d by 2015, down from 14.0 Bcf/d in 2012.

The U.S. averaged 65.6 Bcf/d of marketable natural gas production in 2012, the NEB said, adding that U.S. production was up 4% over 2011 and has been growing since 2005. “Increasing U.S. shale gas production is accommodating more of that country’s requirements and reducing the need for imports from Canada,” the board said.

The NEB said that while gas priced below $4/MMBtu has displaced “significant amounts” of coal-fired electricity generation, “it is not clear enough” whether there will be enough switching to boost prices above $5/MMBtu, which is the price level the NEB believes is necessary to spark a significant return to natural gas drilling activity. “If unable to retain this demand, natural gas prices may remain between $3.00 and $4.00/MMBtu,” the NEB said.

Another wrinkle in getting Canadian natural gas drilling back online comes from south of the border in the prolific Marcellus and Utica shales in the United States. The report highlighted that the addition of pipeline capacity to deliver shale gas from drilled but previously unconnected wells in the Marcellus Shale of Pennsylvania and West Virginia is bringing forth additional deliverability into an already fully supplied North American market, displacing Canadian natural gas exports in the Northeast U.S. and some domestic sales in central Canada. The NEB notes that further displacement of Canadian natural gas could occur due to the developing Utica Shale in Ohio.

The NEB said that while the natural gas market has organically recalibrated itself in the past by either reducing exploration and production in an oversupplied market or raising prices and increasing operations when demand outpaces supplies, the current cycle has a few more challenges. In addition to producing gas as a byproduct when producers are drilling for pricier oil or NGLs, the NEB said the sheer size of the shale gas opportunity encouraged industry to lease very large acreages of land for future development, thereby creating the need to undertake widespread drilling and production to retain these leases.

There is also no quick fix for significantly increasing North American gas demand, the NEB said. Proposed liquefied natural gas (LNG) export facilities represent large new natural gas demand, but they involve long lead times to obtain approvals, establish overseas markets and construct facilities. The report identified other potential sources of major demand growth, but they would also require years or decades to further develop to any meaningful scale. Examples include a potential significant return of petrochemical industry capacity from overseas locations, and widespread use of compressed natural gas or LNG to displace diesel and gasoline in transportation markets.