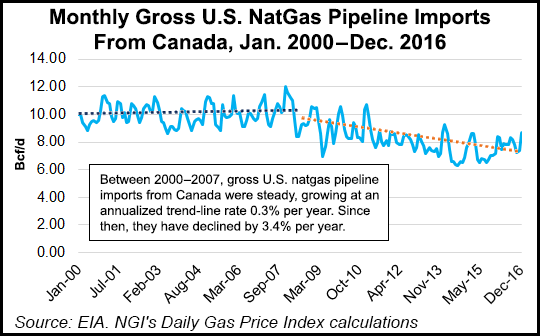 A sobering outlook for an escalating international rivalry surfaced at an annual state of markets conference held by the Canadian Energy Research Institute (CERI), a semi-official industry voice supported by industry, government and academic agencies.

Even that latest bleak CERI forecast — an 80% drop since pipeline deliveries to the U.S. peaked at 10 Bcf/d a decade ago — is more optimistic than the current National Energy Board (NEB) projection of a collapse to zero, added Fogwill.

No Canadian or U.S. energy economists predicted comparable erosion of Canadian oil exports after the NEB reported U.S. sales, chiefly from Alberta’s oilsands, rose to a record of 3.4 million b/d in second-half 2016.

But Canadian projections calling for yet more stellar growth of exports to the U.S. — by one million b/d, to the Gulf of Mexico refining region via new pipeline capacity — were rated as wishful thinking by still-growing northern bitumen projects.

U.S. shale production will revive briskly from the 2015-2016 international price lows as oil recovers into the US$55/bbl area, Emerson added. She described predictions of a one million b/d comeback as bullish but said a 600,000-650,000 b/d increase this year alone looks likely.

From a Canadian perspective the strength of U.S. shale production with horizontal drilling and hydraulic fracturing is especially powerful on export markets for liquefied natural gas (LNG), the well-attended CERI session heard.

“The Americans have very significant advantages in this game,” said Geoffrey Cann, an oil and gas partner in Deloitte Canada whose professional pedigree includes four years of work in the Australian LNG development boom.

Australian projects, launched when oil was US$100/bbl and LNG was valued at matching highs by energy index contracts, run to US$3,500 per ton, Cann said. The new Australian export networks need gas prices of US$16-18 for 20 years to break even, he added.

“How are we going to deliver these [Canadian] projects at half the cost in Australia? I don’t have an answer for that,” he said.

U.S. shale producers are headed toward gas-liquids exports of one million b/d by 2020 and 1.3 million b/d as of 2025, Rawlusyk said. He added that although Asian demand is poised to grow, the burst of new supplies has cut prices to less than US$400 per ton from nearly US$1,000 since 2012.