As global demand for oil slows, surging U.S. shale and light tight oil (LTO) production is causing Saudi Arabian and West African crude oil exports to be diverted elsewhere, while U.S. gasoline exports to the world market are expected to rise, according to the International Energy Agency (IEA). 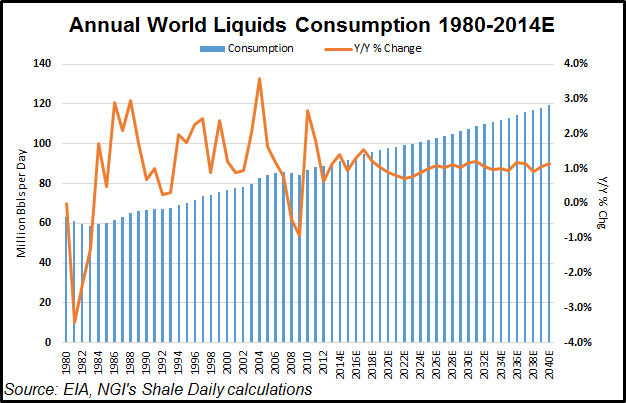 In the latest installment of its monthly Oil Market Report, the IEA said the recent slowdown in global oil demand “is nothing short of remarkable.”

“Latest statistics show that demand growth slowed to below 500,000 b/d year-on?year in 2Q2014 for the first time in two and a half years. Demand projections for 3Q2014 have been revised downwards, as have been forecasts for 2014 and 2015 as a whole. While demand growth is still expected to gain momentum, the expected pace of recovery is now looking somewhat more subdued.”

And while the IEA gave kudos to the Organization of the Petroleum Exporting Countries (OPEC) for keeping supplies near the target of 30 million b/d despite the ongoing violence in Libya and Iraq, the agency said “shifts in the direction of OPEC export flows [are] noteworthy,” and are being impacted by rising unconventional production in the U.S.

“In recent years, surging LTO production has backed out U.S. imports of West African crude, which are now moving to Asia,” the IEA said. “Saudi exports seem to be showing the beginning of a similar shift. Saudi exports as a whole are likely to have run below 7 million b/d for the last four months, their lowest level since September 2011. Exports to the U.S. led the drop amid rising Saudi domestic demand for crude burn and refinery runs.”

According to the IEA, Saudi Arabia’s national oil and gas company, Saudi Aramco, “appears to be pricing oil out of the U.S. market by ratcheting up official selling prices [OSP] to North America, while OSPs to Asia have come off, likely setting the stage for a broad rebalancing of trade flows. Thus is the global crude market continuing to adjust to the new North American supply reality.”

The IEA added that with the rise in LTO and natural gas liquids (NGL) production in the U.S., refiners were investing to absorb increasingly lighter feedstocks, which in turn could mean higher production of light distillates like naphtha and gasoline, as well as liquefied petroleum gas. The domestic demand for gasoline in the U.S. was also declining, thanks to improved vehicle fuel efficiency standards and an increase in biofuel supplies.

Of note, the agency said, was the Eagle Ford Shale, currently the fastest-growing shale play in the U.S. Production of Eagle Ford LTO was expected to reach 1.5 million b/d by the end of 2014, and then hit 1.7 million b/d in 2015.

“To deal with the increasingly bifurcated feedstock slate, of very heavy Canadian grades and light U.S. crude and condensates, refiners are investing in new units, expanding or tweaking existing equipment to accommodate these new realities,” the IEA said. “As the majority of U.S. existing refineries were mostly designed to process discounted heavy crudes, the focus for refiners has shifted to absorb the increasing light crude and condensate volumes, discounted compared with similar imported crudes.”

The IEA took note of plans by several large U.S. refiners, including Valero Energy Corp. and Marathon Oil Corp., to increase light crude oil processing capacity (see Shale Daily, Feb. 6; Jan. 30). The agency added that U.S. net gasoline imports have declined from more than 900,000 b/d in 2005 to 100,000 b/d so far in 2014, with the U.S. actually becoming a net exporter of gasoline in recent months.

“In coming years, as the feedstock slate continues to change and processing capacity keeps adjusting, U.S. light distillate exports will reach increasingly far?flung markets,” the IEA said. “The OECD [Organization of Economic Cooperation & Development] Americas could be left with a surplus of naphtha and gasoline of around 1.3 million b/d by 2019.

“The need to find a market outlet for this surging output of light distillates may be the greatest constraint on the refining industry’s capacity to absorb new supplies and to meet demand for products that the market really needs, such as middle distillates.”

In June, the IEA predicted that the shale and LTO supply revolution would take hold beyond North America, with other countries looking to replicate the success of the U.S. (see Shale Daily, June 17).