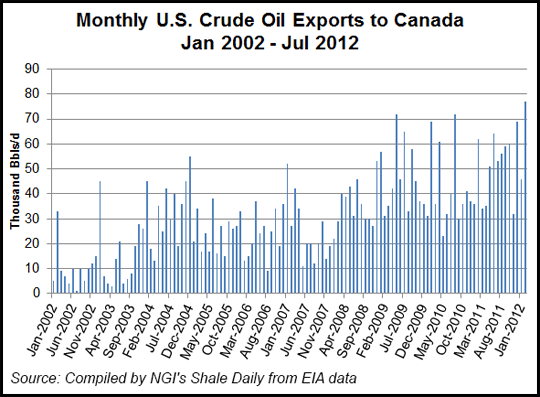 BP already has received permission to export crude oil to specific Canadian refineries from the Department of Commerce’s Bureau of Industry and Security, according to the Financial Times (FT). Swiss trader Vitol also has applied for a license. U.S. crude could be exported to Canada via rail, barge or pipeline.

Shell confirmed it has applied for a license from the Commerce Department, but a U.S. spokeswoman couldn’t comment on possible export destinations. “We can confirm we applied to the Department of Commerce for licenses to export domestic crude oil,” she said. “Crude oil trades on a global scale, and imports and exports follow supply and demand.”

The Commerce Department could not confirm whether it has received applications or granted new licenses. U.S. crude exports would have a “presumption of approval,” according to government officials. Producers also may seek permission to ship U.S. crude from the Gulf Coast as well, according to reports.

Crude exports to Canada from the United States have been ongoing for many years, but the oil is usually re-imported after it has been processed. Exports to Canada are double what they were five years ago, with shipments hitting 77,000 b/d in July, the second highest on record, according to the Energy Information Administration (EIA). U.S. domestic crude oil production currently is about 6.6 million b/d, the highest level since May 1995, EIA said.

Numerous rail loading and related projects within the United States, including by Calgary’s Enbridge Inc., have been completed or announced in the Bakken Shale region as producers look for outlets because of a lack of pipelines to meet their needs (see Shale Daily, Oct. 8; Oct. 5).

The Bakken Shale’s light, sweet crude could help Canadian refiners that depend on European imports. The United States imports more than 8 million b/d, but many domestic refiners are geared to process heavy crude. The sweeter Bakken crude, if exported to Canada, could help refiners in Quebec, Nova Scotia, New Brunswick and Newfoundland, which depend on foreign crude because of a lack of pipeline access to Alberta’s oilsands.

Canada’s National Energy Board said the country imported nearly 650,000 b/d in May, which was 23% higher than in April, but down 5.3% from a year earlier. The figures for how much oil was re-imported to the United States was not included in the numbers.

Lucian Pugliaresi, president of the Energy Policy Research Foundation, told FT, “I believe the assumption that the Commerce Department works on is that crude oil shipped to Canada comes back to the U.S. as product. It equals out more or less…The working assumption is that if you were to submit an application for a waterborne export to Brazil or somewhere else, then Commerce might treat that much different.”