Crude oil prices of “around $60” would be enough to trigger a big increase in U.S. drilling activity, the chief of the International Energy Agency said Tuesday. 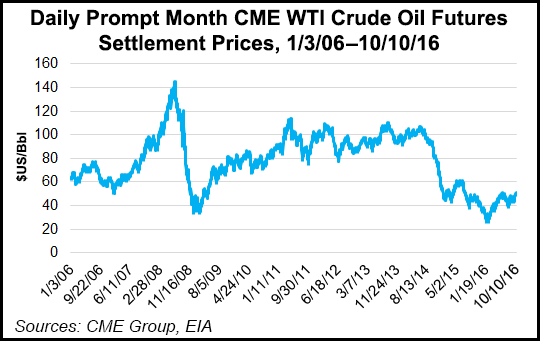 Brent and West Texas Intermediate (WTI) prices began moving higher after the Organization of Petroleum Exporting Countries (OPEC) signaled in late September that members tentatively have agreed to hold output flat; a formal agreement is scheduled to be finalized at the end of November. Prices moved up again Monday after Russia, one of the largest non-OPEC global producers, indicted it was willing to work to stabilize the market.

The 14-nation OPEC, which produces more than one-third of global crude oil output, reached a tentative agreement in late September to reduce output for the first time in eight years — to 32.5 million b/d from an August level of 33.24 million b/d (see Shale Daily, Sept. 28).

However, if OPEC members can reach an agreement, prices likely would surge, sending U.S. shale operators back to work, according to IEA. It’s the push-me, pull-you effect.

“Our supply-demand outlook suggests that the market — if left to its own devices — may remain in oversupply through the first half of next year,” the Paris-based global energy watchdog said. “If OPEC sticks to its new target, the market’s rebalancing could come faster.”

In its September report, IEA had predicted that the global oil surplus would persist into late 2017.

By agreeing to curb production, OPEC has “effectively abandoned” the free market policy it adopted in 2014, IEA said. The new strategy could erode an enormous inventory overhang, but strong U.S. unconventional production likely would be the end result if prices are near $60/bbl.

At that level, there would be “in a short period of time, strong production growth coming from North America and elsewhere,” IEA Executive Director Fatih Birol said. However, it would take months for U.S. producers to prepare rigs and equipment.

The U.S. oil rig count has recovered, but output is falling, BofA said.

Even if OPEC members agree to reduce output, it would take 10-15 months for U.S. shale production to react to a price “shock.” Shale oil output likely will continue to decline sequentially, even if the domestic rig count continues higher.

“While the U.S. rig count has risen to 425, it is still far away from the 1,609 level reached in 2014,” BofA analysts said. And the rig count no longer is the only factor in estimating production — rig efficiency and well productivity are key.

“On the rig level, efficiency improvements have faded somewhat versus year-ago levels across all basins. As for well productivity, initial production rates (IP) and cumulative production have stopped increasing in almost all basins but the Permian, where IPs are up 28% year-on-year. An average Permian well now produces more oil than in any other play. Put differently, West Texas is once again set to lead a recovery in U.S. crude production as prices rise.”

Shale output is path-dependent and is going to vary with price, according to BofA. U.S. unconventional oil output likely will reverse its current trend before rebounding sequentially by 660,000 b/d between the second and fourth quarters of 2017.

Even if OPEC and other oil producers outside North America come to terms with stabilizing oil production, the deal eventually would be “undone,” according to Goldman Sachs analysts. In a note Tuesday, analysts led by Damien Courvalin said “price-induced responses” likely would gradually offset the OPEC production cut next year.

“The aging U.S. shale well profile is stabilizing production and as a result, higher prices will allow for a rapid ramp-up in production in 2017,” Courvalin said. Demand growth may remain resilient, “but the historical activity and price sensitivities suggest less growth at higher oil prices.”

Legacy production declines have remained limited beyond China, Venezuela, Colombia and Mexico as producers maximize cash flow from existing production, but “so far, shale declines and short-term disruptions have each been a bigger driver of the oil market rebalancing than low price-induced production declines.” At a slightly higher oil price, “we would expect a ramp up in short-cycle brownfield investment to further reduce legacy declines.”

The initial recovery in prices and fundamentally progressively would be undone, according to Goldman.

“In the instance where a deal is reached but its production impact is offset by price sensitive sources of supply, we would expect our 2017 WTI price forecast of $52.5/bbl to hold, although with prices initially higher than we expect (1Q2017 at $45/bbl) but in turn, lower prices later in the year than we expect (4Q2017 at $60/bbl) as non-OPEC production reacts to the higher prices now.

“In fact, the momentum on this supply response would likely require a renewed cut in OPEC production in 2018, at which point the volume loss would more than offset the price recovery.”

Analyst Stephen Smith, in his monthly report for October about the energy markets, reminded clients that WTI peaked in June 2014 at $107/bbl. By that Thanksgiving, WTI already had collapsed to $66, and by New Year’s Day 2015, WTI had fallen to $53. However, in the second half of 2015 and through 2Q2016, the global storage surplus trended sharply higher to new quarterly records. Lower 48 onshore production peaked near 7 million b/d in the spring of 2015 and by May 2016 had declined to near 6.3 million b/d.

The U.S. onshore decline rate now has flattened to “almost zero,” Smith said. “This flattening is sooner than we expected and it may have included some temporary effects. Nonetheless, we have reduced our 2017 annual projected U.S. oil production decline rate from last month’s forecast of 3.8% to our current projection for a 0.8% decline.” The recent oil price spikes have allowed U.S. shale producers to improve their hedge positions, he said.

“Our latest data revisions and forecast update suggests that the surplus peak for the current glut is now more likely to be 4Q2016,” Smith wrote.