U.S. natural gas merchants are catching up to the traditional Canadian champions of international trade in North American production, according to the latest trade scorecard compiled the United States Department of Energy (DOE). 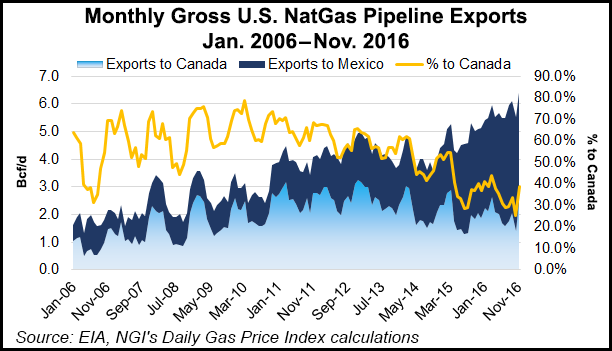 The agency’s 2016 third quarter report confirms a lasting trend of U.S. exports emerging as the hot growth item in North American gas trade since the onset of the “shale gale” of rising production with horizontal drilling and hydraulic fracturing.

When the new technology was just beginning to spread, Canada dominated the continental market with 2008 full-year exports of 3.8 Tcf — four times U.S. cross-border sales of 924 Bcf.

The Canadian pipeline exports of 2.263 Tcf during January through September last year were up by 11% from 2.034 Tcf in first three-quarters of 2015.

To pipeline deliveries into Canada and Mexico, U.S. gas merchants added dramatic results of breaking into overseas tanker exports of liquefied natural gas (LNG): 106.2 Bcf in the first three-quarters of 2016, up 672% from 13.8 Bcf a year earlier.

Canadian gas merchants have no prospect of entering the LNG trade any time soon due to fully supplied overseas markets and slow national and provincial regulatory regimes, according to a recent review of 20 Pacific Coast terminal projects by Moody’s Investor Services.

While LNG shipments only began, U.S. exports to Mexico stood out as the top volume growth item of international trade in North American gas production, jumping by 31% to 1.001 Tcf in the first three quarters of 2016 from 764.5 Bcf a year earlier.

U.S. pipeline exports to Mexico have more than doubled since 2011. Shipments to Canada have faded into a distant second-place destination for U.S. cross-border sales, at a volume of 555.9 Bcf in the first three quarters of 2016, up 7% from 517.5 Bcf in the same period of 2015.

But the latest gas trade accounts suggest that prices are firming at least enough to slow the pronounced erosion of the traffic’s value in the first half of last year.