Expanded U.S. sanctions will not likely halt Russia’s Nord Stream 2 (NS2) natural gas pipeline, according to Uniper, but management has warned investors that the chances of delays have increased. 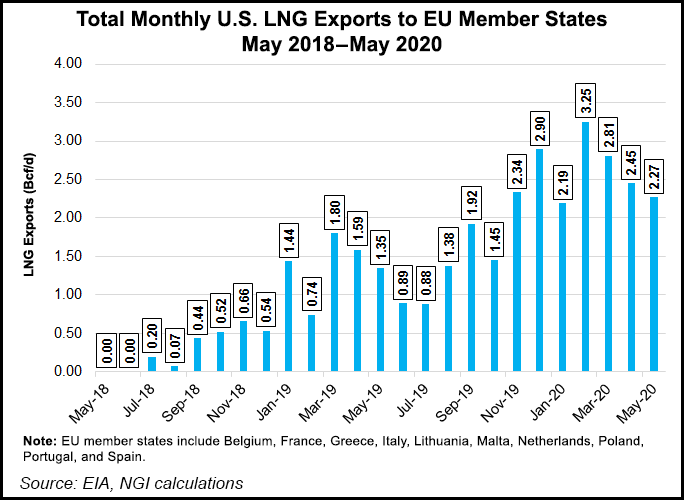 In 2017, Uniper was among five European companies that agreed to provide long-term financing for 50% of the estimated $11.8 billion project, with Russian state-controlled gas company Gazprom providing the rest.

Uniper CEO Andreas Schierenbeck, speaking during a second quarter conference call earlier this month, said in a “worst-case” scenario the pipeline “would never be finished.” The question would be, “can we get our money back or not? But that’s a thing to be seen at the moment. I don’t expect that scenario…I think we underlined that probably with all the other financial investors of that project.”

In a last-ditch attempt to stop construction of the 745-mile, 5.3 Bcf/d line that would traverse the Baltic Sea from Russia, to Greifswald, Germany, the Trump administration last month unveiled a plan to potentially sanction companies that participate in the project.

The U.S. Department of State plans to remove a clause that previously grandfathered NS2 from the 2017 Countering America’s Adversaries Through Sanctions Act (CAATSA). The act, imposed during the Obama administration, would allow the United States to impose sanctions against NS2 participants that do not wind down investments.

Secretary of State Mike Pompeo said the pipeline, which has significant investment from European companies, needs to be stopped because it would strengthen Russia’s stranglehold on the European Union (EU), which relies on Russia for about half of its gas imports of 340 billion cubic meters/year.

Twenty-four of 27 EU member states filed a complaint with the State Department over the use of sanctions to influence American foreign policy goals, Bloomberg reported, citing an unnamed European diplomat.

Uniper management does not expect the line to be stopped, but “the probability of a delay or even noncompletion is increasing.” The NS2 consortium is “working to mitigate the effects of the currently still suspended pipelaying activity and to bring the project to completion.”

European countries that would receive gas from NS2 have said the project is necessary to lower prices and provide security of supply. Gas transit through Ukraine has previously been cut in cold winter months because of disputes with Russia.

“A completion of the project receives strong political support from several country governments as well as the EU,” Uniper management said. If the project is not built Uniper indicated it may need to impair the loan and forfeit planned interest income.

Republican Sens. Ted Cruz of Texas, Tom Cotton of Arkansas and Ron Johnson of Wisconsin ratcheted up tensions earlier this month in a letter to Fährhafen Sassnitz GmbH, which operates Mukran Port in Germany. They warned of “crushing legal and economic sanctions, which our government will be mandated to impose” if the company does not cease cooperating with Russia’s Gazprom in NS2. The small port houses two pipe-laying vessels that Gazprom plans to use to complete NS2.

In addition to removing the grandfathering clause in CAATSA, the senators cited the National Defense Authorization Act (NDAA) signed into law in December. Among other things, the act requires the president to impose sanctions on foreigners involved in providing pipe-laying vessels for NS2.

In July, the Senate passed its version of the NDAA for fiscal year 2020, which also would require sanctions against companies that “facilitate providing vessels for such activities, or that provide insurance or certain services for those vessels.”

German Foreign Minister Heiko Maas earlier this month reportedly told Pompeo of his “dismay” over the senators’ threat, according to the Associated Press.