The United States is set to produce more oil and liquids than Russia and Saudi Arabia combined by 2025, according to an analysis by Rystad Energy. 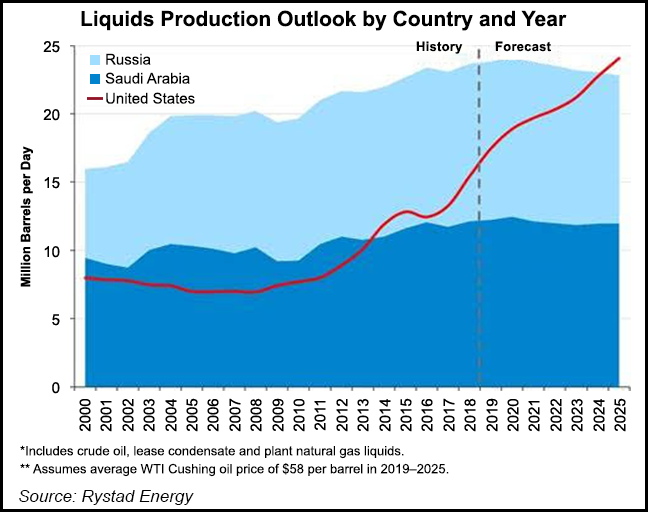 In Rystad’s base case oil price scenario, U.S. liquids production is forecast to surpass 24 million b/d over the next six years, which would outpaced the combined output from Russia and the Saudis.

“The United States, having regained its position as the world’s top liquids producer in 2014, is poised to accelerate into a league of its own over the next six years and eclipse the collective output of its two closest rivals by 2025,” said Rystad partner Artem Abramov.

U.S. data confirm that the country is on pace remain a major force in world markets. According to both the reference case and all alternative cases in the Annual Energy Outlook 2019 (AEO2019) issued earlier in January by the Energy Information Administration, the United States will become a net energy exporter by 2020 and remain so through at least 2050, the end of the projection period.

In last year’s AEO, EIA had projected the United States would achieve that goal by 2022, but increases in natural gas, natural gas plant liquids (NGPL) and crude oil production, coupled with slow growth in domestic energy consumption, will tip the scales to net exports for the first time since 1953. Natural gas and NGPLs are forecast to have the highest production growth, with NGPLs accounting for almost one-third of cumulative U.S. liquids production during the project period, EIA said.

The “Big 3,” i.e. United States, Russia and Saudi Arabia, lately have jockeyed for the No. 1 slot as global leader for crude oil, lease condensate and NGPL production, but market-driven U.S. oil activity and production from the Lower 48 has built significant momentum, Rystad noted.

Since 1970 the United States has not seen its liquids market share exceed 50% among the three producing nations.

“U.S. growth potential could be slowed if oil prices slide below our base case for extended periods but, as long as average prices stay above $50, positive U.S. production tendencies will persist,” Abramov said.

Domestic liquids production is going to continue to be driven by onshore basins, led by the Permian in Texas and New Mexico.

Because of the steep production decline rates of unconventional wells, “consistently strong” annual capital expenditure (capex) levels are needed to deliver Rystad’s base production forecast. The forecast corresponds to as much as 20% growth compared to the average investment level observed in the U.S. oilpatch during 2018. However,the $260 billion capex level recorded in 2014 is not expected to be seen again.

“Some market participants have voiced concerns about a possible depletion in resources from core parts of major liquids basins in the U.S.” Abramov said. “But there are no indications that such a development will occur any time soon.

“While Rystad Energy generally applies a conservative approach when estimating remaining drilling inventory per acreage, even in the most mature Bakken and Eagle Ford basins, about 70% of economically recoverable resources in Rystad Energy’s base case oil price scenario have yet to be developed.”