The U.S. Department of Energy (DOE) last week directed its attention to electric vehicles (EV), batteries and reliable charging stations on a transitioning grid with a $200 million funding announcement followed by a request for information (RFI) for charging EVs on the grid. 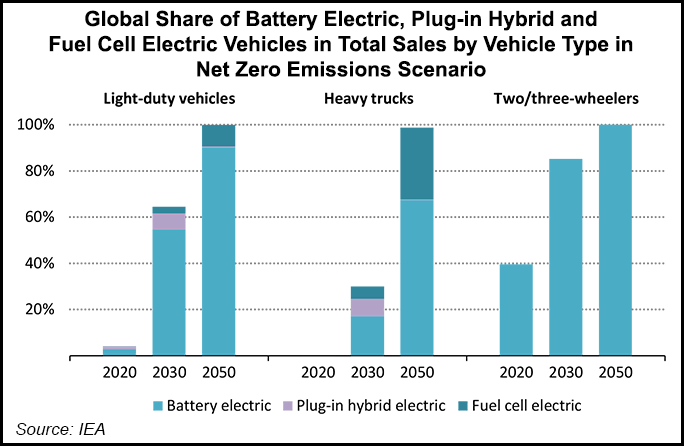 At a roundtable discussion on advancing the domestic lithium battery industry, DOE Secretary Jennifer Granholm announced $200 million to fund EVs, batteries, and connected vehicle projects at national laboratories over the next five years.

“America has a clear opportunity to build back our domestic supply chain and manufacturing sectors, so we can capture the full benefits of an emerging $23 trillion global clean energy economy,” Granholm said at the roundtable.

The DOE’s network of 17 national laboratories would use the funds, administered by the Vehicle Technologies Office (VTO), to investigate more EV innovations to help decarbonize the transportation sector, the primary source of greenhouse gases in the United States.

“We’re focusing on the entire battery supply chain from soup to nuts — from sustainable mining and processing to manufacturing and recycling — which will translate to thousands of new jobs across the country and put more clean-running electric vehicles on the road,” said Acting Assistant Secretary Kelly Speakes-Backman.

With a transitioning electricity and transportation sector, lithium-based batteries are considered an important strategy in overcoming energy gaps. According to the DOE’s Office of Energy Efficiency and Renewable Energy (EERE), the nation currently relies on battery imports, which leaves the United States more exposed to “supply chain vulnerabilities that threaten to disrupt the availability and cost of these technologies.”

Meanwhile, as the United States aims to achieve a carbon-free electricity sector by 2035, EERE is investigating the impacts of more EVs hitting the charging station on a transition grid through its latest RFI.

“It is important to examine the potential impact on grid reliability and resiliency as a result of that integration,” the EERE said.

The VTO and the Office of Electricity’s Advanced Grid Research and Development Division issued the RFI to solicit input on the grid standards needed to integrate EVs with the grid, particularly as it transitions to a carbon-free environment. The Office is also seeking information on cybersecurity challenges throughout electrification in the transportation sector.

While the EV market has not grown as much as in Europe and China, President Biden’s American Jobs Plan includes a $15 billion fund to construct a national network of 500,000 EV charging stations.

The DOE also has a funding opportunity of up to $14.5 million for well owners or operators to partner in active field testing of enhanced geothermal systems (EGS) technologies at existing wells. The Wells of Opportunity 2021 project would build on a previous endeavor which tackled near-field and in-field EGS as well as geothermal production.

“Making use of the stranded heat beneath our feet and putting idle or underproductive wells to use for power generation will help us transition this important renewable resource closer to widespread deployment,” Speakes-Backman said.

According to a 2019 study from the DOE Geothermal Technologies Office, technological improvements could increase geothermal power generation 26-fold by 2050, from 3.7 gigawatts electric (GWe) to 60 GWe.