BP plc has clinched an agreement to purchase a unique blend of renewable natural gas (RNG) initially for customers in California. 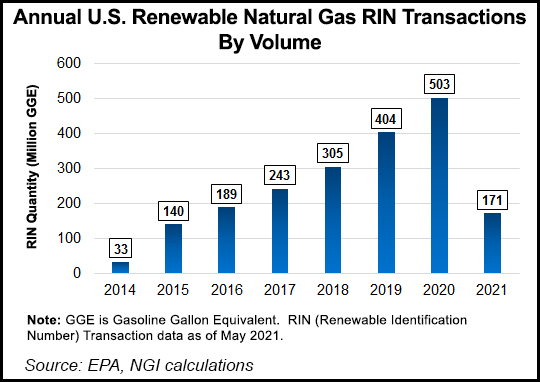 Maryland-based CleanBay Renewables said it would provide BP with RNG produced from poultry litter, a mixture of manure, feathers and bedding. The biogas is processed into RNG and can be used to fuel vehicles.

Through the 15-year agreement, BP’s trading and shipping team plans to sell the fuel to its customers, beginning in California. BP is the largest natural gas marketer in North America, according to NGI’s quarterly survey.

“Working with innovative companies like CleanBay will be key for BP to reach our net-zero ambition,” said BP’s Michael Thomas, vice president Biogas Origination. “As one of the largest suppliers of RNG to the U.S. transportation sector, this agreement will help us continue delivering competitive, reliable energy solutions.”

The CleanBay deal is the second RNG transaction by BP this month. The London-based energy major added RNG resources in a separate deal with a Gevo Inc. Iowa facility under construction.

Financial details with CleanBay were not disclosed. However, the agreement would “directly” support financing for CleanBay’s “first active bio-conversion facility, planned in eastern Maryland,” executives said.

CleanBay is exploring sites for future facilities in the Mid-Atlantic, Southeast and California. The goal is to establish a portfolio of RNG and power facilities that could provide farmers with an alternative use for their poultry litter and a fertilizer for food production.

Each of CleanBay’s 30 proposed facilities is expected to generate enough sustainable energy to power 9,200 vehicles a year by recycling more than 150,000 tons/year of poultry litter. The company also plans to co-locate solar power fields to meet onsite power needs and produce alternative products like green hydrogen.

“RNG is a necessary energy transition approach in the near term, but green hydrogen and the use of RNG to power electric vehicle charging stations will be the backbone of a fast transition to a net zero future,” said CleanBay CEO Donal Buckley.

New sites are planned by the JV in Iowa and Wisconsin, with expansions eyed in Michigan and South Dakota.

Chevron plans to purchase RNG produced from the projects and market the volumes for use in vehicles operating on compressed natural gas.

“This latest expansion with Brightmark advances our strategy of higher returns and lower carbon,” said Chevron’s Andy Walz, president of Americas Fuels & Lubricants. “Opportunities like these not only reaffirm our commitment to investing in ways that are good for the environment, our consumers and our stockholders, they also bolster our previously announced objective to increase RNG volumes tenfold by 2025 over 2020 volumes.”

Brightmark CEO Bob Powell said the expanded JV “is another positive step forward in the decarbonization of the farming industry. Our carbon-negative projects are successfully reimagining waste and delivering significant environmental benefits while improving economics for our dairy farm partners.”