A decline in the U.S. rig count through the second half of 2017 “appears inevitable” based on recent oil prices, but an undersupplied market could drive prices and drilling activity sharply higher in 2018, analysts at Raymond James & Associates said Monday. 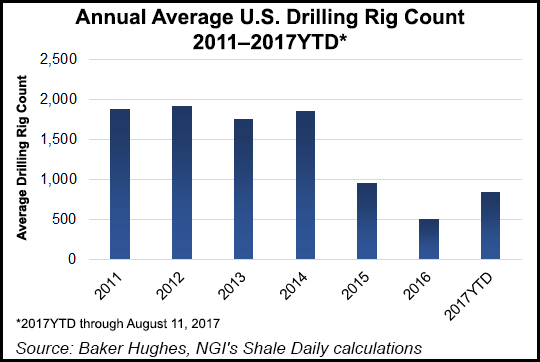 In the short-term, expect the U.S. rig count to fall by around 100 from the roughly 950 rigs currently running, analyst J. Marshall Adkins and his team said in a research note.

There’s typically a 15-20 week lag time for drillers to respond to oil prices, and after “an exceptional surge” in rigs this year combined with flat oil pricing, exploration and production (E&P) company spending has “rapidly” outpaced cash flows thus far in 2017. Both factors point to a retreat in the rig count moving through the second half of the year, according to Adkins.

But the current futures strip also appears unsustainable, as it would send the U.S. rig count even lower and lead to further declines in global inventories, Adkins said, a dynamic that underlies the firm’s forecast for $65/bbl oil in 2018, with a U.S. rig count averaging 1,100.

“While traders are currently focused on the fear that U.S. production will grow too fast if the rig count doesn’t slow, we think it is much more important for investors to understand that if oil prices don’t rise over the next six months, the 2018 rig count will be much lower than we are modeling. Likewise, U.S. production will grow substantially less than the amount needed to balance the oil market next year,” Adkins wrote.

“More importantly, our U.S. oil supply growth estimate of about 1.5 million b/d next year at 1,100 rigs would fall by almost 1 million b/d to around 600,000 b/d if the U.S. rig count falls to 700 next year,” Adkins wrote. “That means if current oil futures prices prove correct, these low oil prices (and resulting lower rigs and production) would likely drive roughly another 1 million b/d reduction of global inventories on top of the 1.2 million b/d global oil inventory reductions that we expect this year.

“That would put global oil inventories way below any perception of ‘normal’ and, of course, oil prices would be forced to rise. Again, a circular reference model that points to higher oil prices and higher U.S. drilling levels next year.”

In the shorter-term, looking at recent oil pricing and E&P spending levels, something has to give, according to Adkins.

After months of oil prices in the mid-$40s, it is “abundantly clear that E&P spending is rapidly outpacing cash flows. In fact, our U.S. E&P cash flow analysis suggests that at current oil prices, the U.S. E&P industry is on pace for one of the highest outspend years in the past two decades in percentage terms,” Adkins wrote. “U.S. E&Ps simply can’t keep outspending at the pace they have done so far this year. Either oil prices move sharply higher or drilling activity slows. We think both will occur in the next few months.”

He pointed to the number of E&Ps that — during the recent round of 2Q2017 earnings calls — revised lower their capital expenditure budgets for the remainder of the year.

“A historical examination of the correlation between” West Texas Intermediate prices “and the U.S. rig count shows a tight relationship between the two” with changes in drilling activity lagging by four to five months.

“Oil prices (shifted forward by 18 weeks) peaked about four to five months ago in the low to mid $50s/bbl and subsequently declined about $10/bbl (20%) over the next four months,” Adkins wrote. “About 18 weeks after the February peak, we started to see the U.S. rig count growth sputter as it now appears to be in the early stages of a rollover.

“Over the past month, we have already seen the rig count level off, with three of the last four weeks either flat or down sequentially. Going forward, we expect the recent plateau should turn into consistent declines over the next few months.”

But there are reasons to think that the declines won’t be as steep as current oil prices would predict, according to the firm.

Predicting a “modest disconnect” between recent oil prices and U.S. drilling activity levels, Adkins pointed to recent comments on customer activity from oilfield services operators Schlumberger Ltd. and Patterson-UTI Energy Inc. He also said a rise in oil prices over the next six months “might give E&Ps more confidence to outspend by more than normal.”

“Rig count to historical oil price trends would indicate that the U.S. rig count should fall by as much as 200-250 rigs over the next four to five months (down to the 700-750 range) based on a simple correlation,” Adkins said. “However, we think E&Ps are likely to be more resistant to laying down rigs if oil prices are moving higher through the end of the year.”