Continuing on a modest upward trajectory from recent pandemic-induced lows, the U.S. rig count climbed three units to 269 for the week ending Friday (Oct. 9), according to the latest Baker Hughes Co. (BKR) tally. 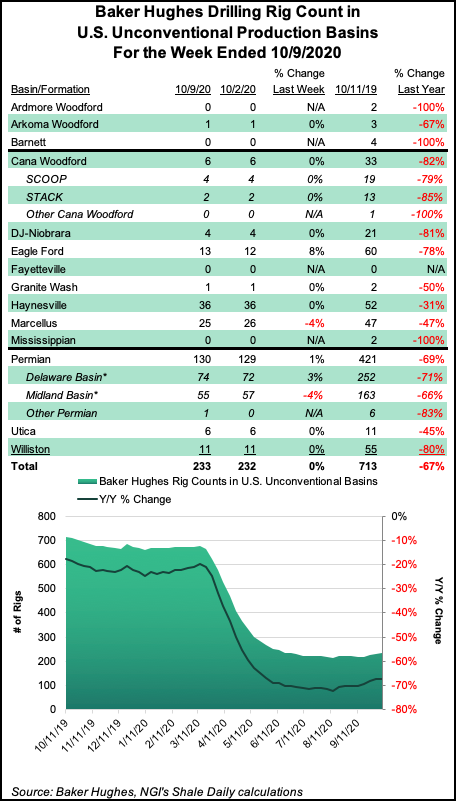 A four-rig increase in oil-directed drilling offset a one-rig decline in the natural gas patch, leaving the combined domestic count 587 units behind the 856 rigs active in the year-ago period. BKR’s U.S. count has now posted four straight week/week gains since falling to 254 during the week ending Sept. 11.

All of the gains occurred on land, with Gulf of Mexico rigs flat week/week at 14. Four horizontal units were added in the United States during the week, with one vertical unit exiting the patch, according to BKR.

The Canadian rig count added five units — three gas-directed and two oil-directed — to end the week at 80, versus 146 in the year-ago period.

The combined North American count ended the week at 349, versus 1,002 rigs active at this time last year.

By BKR’s count, there were no big changes among major plays during the week. The Permian Basin and Eagle Ford Shale each saw a net increase of one rig, while the Marcellus Shale dropped one overall.

Broken down by state, Texas posted a net increase of three rigs overall for the week, while New Mexico picked up one rig. Mirroring the decline in the Marcellus, Pennsylvania dropped one rig from its total, ending with 18 active units overall, versus 32 a year ago.

EIA expects oil production to taper in the coming months and “generally decline to an average of 11.0 million b/d in the 2Q2021 because new drilling activity will not generate enough production to offset declines from existing wells” amid new pressure on prices. 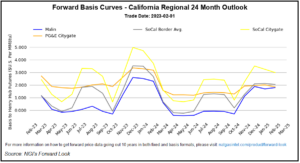