A major hurricane and a corresponding dramatic pullback in offshore drilling numbers saw the overall U.S. rig count plummet 11 units to 497 for the week ended Friday (Sept. 3), according to the latest figures published by Baker Hughes Co. (BKR). 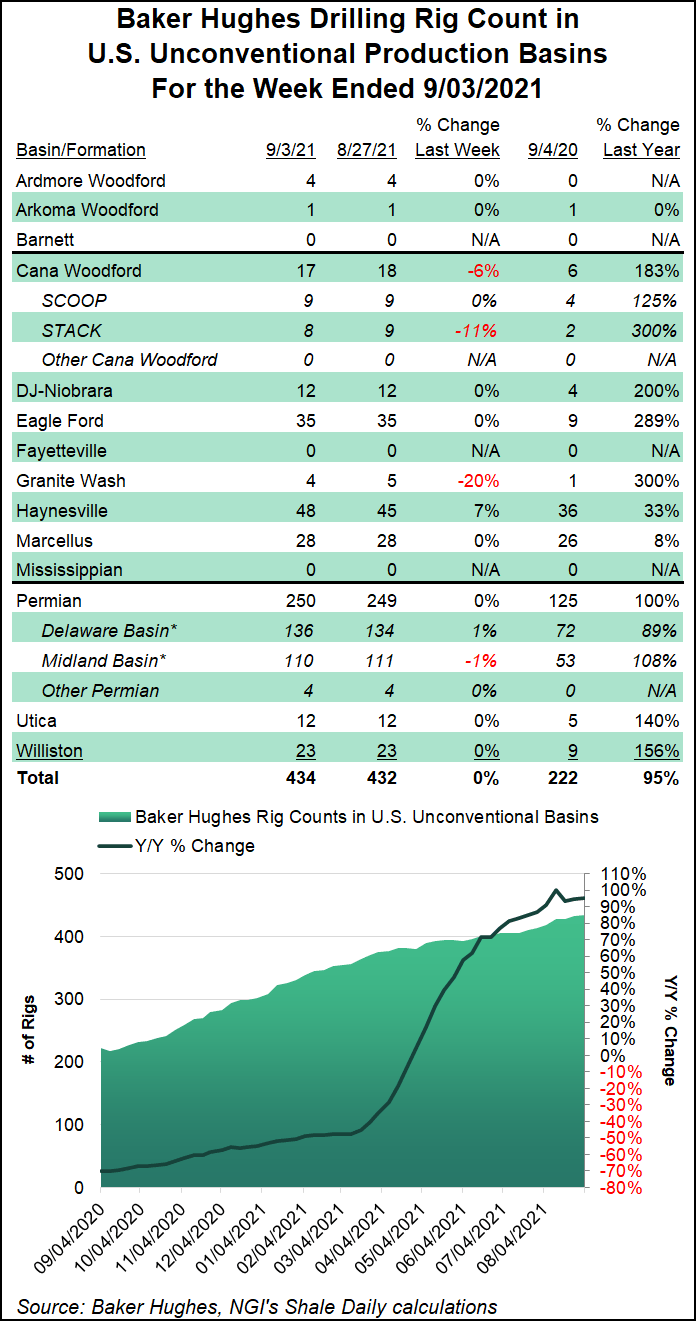 Net changes in the United States included a 16-rig decrease in oil-directed drilling and a net five-rig increase in natural gas-directed units. BKR reported a steep 14-rig decline in the Gulf of Mexico (GOM) for the period, leaving zero active rigs there in the oilfield services company’s latest weekly data. Three rigs exited inland waters for the week, while five rigs were added on land.

The reported drop in GOM activity comes in the wake of the devastation wrought by Hurricane Ida, which had shut in most of the region’s production in the days leading up to the latest BKR rig report. BKR said its GOM rig count was at zero as of Sept. 2 because of Ida’s landfall along the Louisiana coast late last month.

“Rig operators began halting exploration and development activities” on Aug. 24 “in anticipation of the storm, with operation assessment ongoing in the area,” the company said.

BKR’s U.S. count of 497 as of Friday compares with 256 rigs active in the year-ago period. Directional rigs decreased by 17 overall for the period, partially offset by increases of four horizontal rigs and two vertical units.

The Canadian rig count, meanwhile, climbed five units week/week to finish at 152, up from 52 at this time last year. Changes there included a seven-rig increase in oil rigs and a two-rig decline in natural gas-directed units.

In the state-by-state count, Louisiana unsurprisingly bore the brunt of the net declines for the week, dropping 14 rigs from its total to fall to 35, according to the BKR numbers. Alaska, New Mexico and Oklahoma each added one rig week/week.

Broken down by major plays, the Haynesville Shale enjoyed a positive week, picking up three rigs to reach 48 overall, besting its year-earlier total of 36. The Permian Basin added one rig for the period, while the Cana Woodford and Granite Wash each dropped a rig from their respective totals.

The latest Energy Information Administration (EIA) petroleum data, released earlier in the week, showed a large drop in domestic oil inventories that left stocks well below historic averages in the week-earlier period. Demand for U.S. petroleum products climbed while production only inched ahead, according to the agency.

Fallout from Ida and ongoing impacts of the coronavirus Delta variant add wrinkles for the weeks ahead. Production increase plans by the Organization of the Petroleum Exporting Countries, aka OPEC, could also alter the landscape. However, through August, strong domestic demand for products derived from crude and its impact on supplies punctuated the U.S. oil narrative.