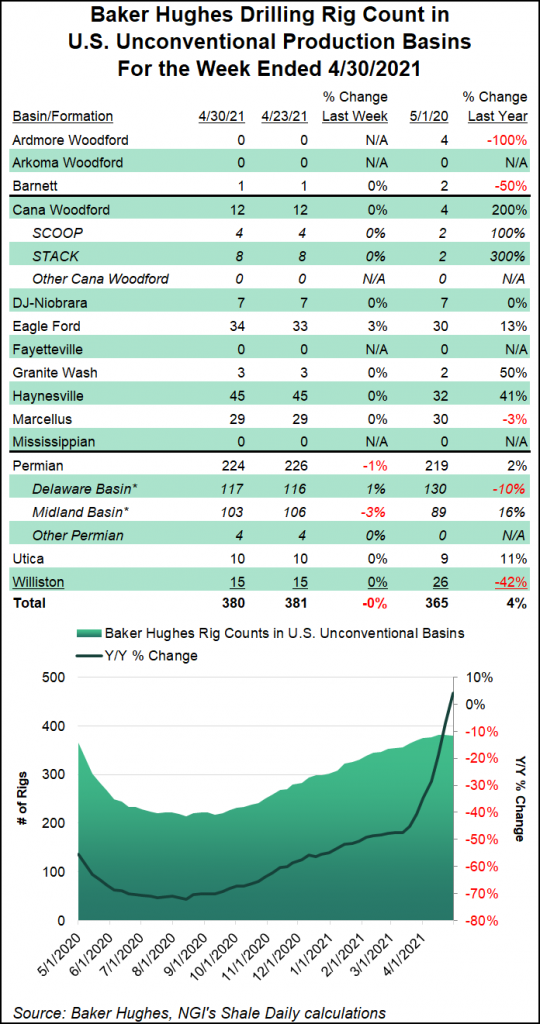 Two natural gas-directed rigs were added in the United States during the week, along with one miscellaneous unit. Those gains offset the departure of one oil-directed rig overall, according to the BKR numbers, which are based partly on data from Enverus.

The combined 440 rigs active as of Friday represents a 32-rig increase year/year, improving over a year-ago period impacted by the start of the Covid-19 pandemic response.

Total land rigs remained unchanged week/week in the United States, while the Gulf of Mexico added two rigs to grow its total to 13, versus 16 a year ago.

The Canadian rig count declined four units to 51 for the week, up from 27 a year ago. Changes included the departure of seven gas-directed units, partially offset by a three-rig increase in oil-directed drilling.

Broken down by play, the Permian Basin saw two rigs exit overall for the week to drop its tally to 224, up slightly from 219 rigs active at the same time last year. Also among plays, the Eagle Ford Shale added one rig for the week to reach 34 rigs, up from 30 a year ago.

Broken down by state, Louisiana added two rigs, while Texas added one. New Mexico saw a net decline of one rig for the week, according to the BKR data.

With quarterly earnings season underway for the oil and gas industry, comments from executives have generally reflected an optimistic outlook for U.S. onshore activity.

“Crude oil prices trading in a tight band around $60 have been supportive of increasing activity,” he told investors. “Looking forward, based on conversations with customers, we now have greater confidence in further improvement in drilling and completion activity.

“We expect our rig count will reach approximately 80 rigs over the next three months, with most of that growth coming late in the second quarter and early in the third quarter.”

“We’re in the midst of a strong drilling services recovery cycle,” Neveu said. “Without any doubt, the outlook has substantially improved even from just a few weeks ago. Global excess inventories of crude are rapidly declining. Demand for crude continues to recover trending toward pre-pandemic levels as the global economy gradually opens.”