Posting its smallest weekly decline in months, the U.S. rig count dropped one unit to finish at 265 for the week ending Friday (June 26), suggesting that upstream activity could finally be stabilizing after a prolonged period of Covid-induced retrenchment. 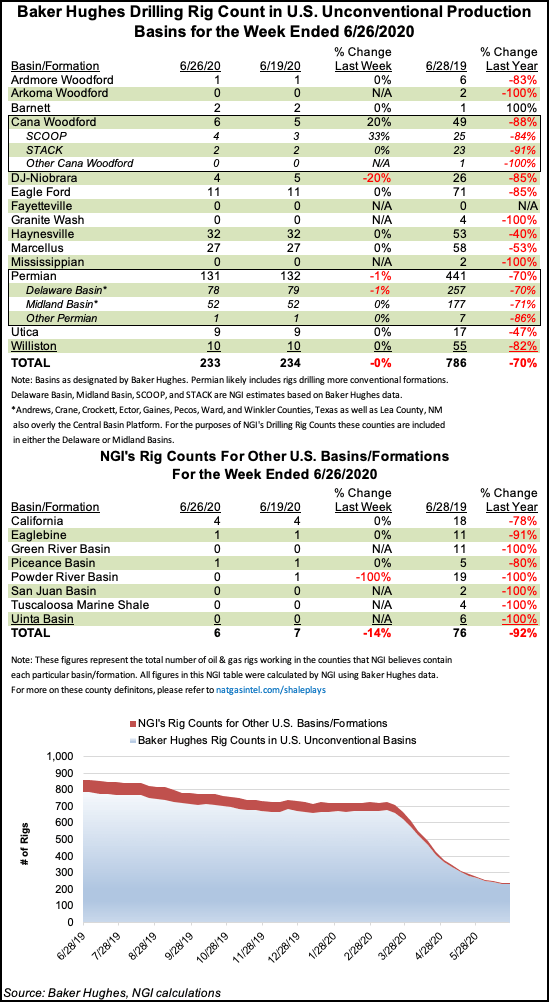 Four horizontal rigs exited the patch in the United States during the week, partially offset by the addition of two directional rigs and one vertical. Gulf of Mexico activity held steady at 11 rigs.

The Canadian rig count fell four units — three gas-directed and one oil-directed — to end at 13, down from 124 a year ago.

The combined North American rig count finished the week at 278, down from 1,091 at this time last year.

Week/week adjustments were modest among major plays during the week. The Permian Basin and Denver Julesburg-Niobrara each saw one rig depart, while the Cana Woodford added one.

Among states, Oklahoma and Texas saw a net increase of one rig a piece for the period, while Colorado, New Mexico and Wyoming each dropped one rig from their respective totals, according to BKR.

The collapse in oil prices, brought about in part by the demand-crushing pandemic, has wiped an estimated $1.6 trillion from the valuation of the global upstream industry, with North American losses leading the way, a new analysis by Wood Mackenzie has found.

In the United States, capital expenditures (capex) are down by around 39% from the pre-crash view, with the Permian most affected.

“The record low prices and near-full storage tanks forced some operators to shut-in production,” researchers said. However, the Permian, as the most active U.S. play, should lead the recovery, with 85% of supply growth through 2025.

Meanwhile, Occidental Petroleum Corp., which made a $57 billion bet last year to take over Anadarko Petroleum Corp. in part to secure its Permian position, said Thursday it expects to write down the value of its oil and gas assets during the second quarter by $6-9 billion.

In a U.S. Securities and Exchange Form 8-K on Thursday, Oxy made it clear that its financial fortunes are dwindling because of the pandemic and the damaging impact of low commodity prices.