The United States remains the world’s top petroleum and natural gas hydrocarbons producer, exceeding the output of both Russia and Saudi Arabia, the second- and third-largest producers in 2014, according to the U.S. Energy Information Administration (EIA). 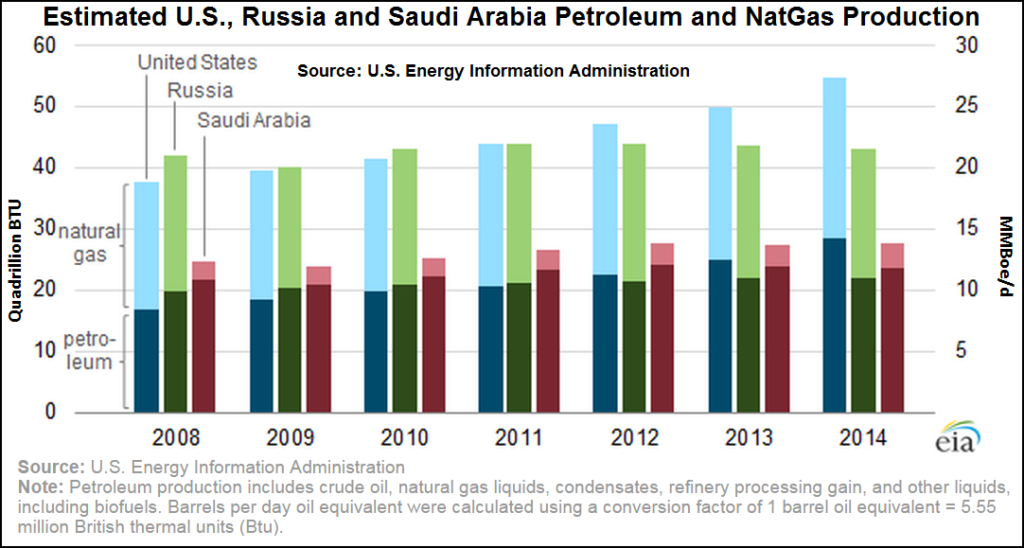 “While U.S. hydrocarbon production over the past several years is directly attributed to its success at exploiting tight oil formations and shale gas, other key factors also acted to keep hydrocarbon production from increasing in Russia and Saudi Arabia in 2014,” the agency said. “Although Russian petroleum production continued to increase, natural gas production declined because weak European economic growth and a warm 2013-2014 winter reduced demand in Russia’s primary market for gas exports.

“While total petroleum and natural gas hydrocarbon production estimates for the United States and Russia in 2011 were roughly equivalent, by 2014 U.S. production exceeded Russian production by almost 12 quadrillion Btu.”

The oil market’s recent price correction may pause the North American supply “party,” but it won’t bring it to an end as the roaring 2020s kick off an era of even more abundance than earlier forecast, the International Energy Agency (IEA) said earlier this year (see Shale Daily, Feb. 10). Supermajor ExxonMobil Corp. has estimated that North America’s natural gas production will grow by about 75% from 2010 to 2040 to around 140 Bcf/d, and will surpass the Russia/Caspian region as the largest gas-producing region in the world within five years (see Daily GPI, Dec. 9, 2014).

Russia’s conventional production is the “polar opposite” of the United States, facing a “perfect storm of collapsing prices, international sanctions and currency depreciation,” according to IEA Executive Director Maria van der Hoeven. “Russia will likely emerge as the industry’s top loser with production set to contract by 560,000 b/d over the period 2014 to 2020. Unfortunately, the knock-on effects from Russia’s struggles could be significant for a number of countries in the region.”

In late 2014 the oil minister of Saudi Arabia successfully argued against reducing OPEC oil output, despite the double-digit decline in oil prices since June, by telling fellow members they needed to combat the growing influence of U.S. shale oil production (see Shale Daily, Dec. 1, 2014). OPEC agreed to maintain its ceiling of 30 million b/d, which is at least 1 million b/d above its estimate of demand for oil in the first half of 2015.