Produced volumes of U.S. shale gas will be bigger than conventional gas resources ever were or will be, BP plc’s chief economist said Wednesday. 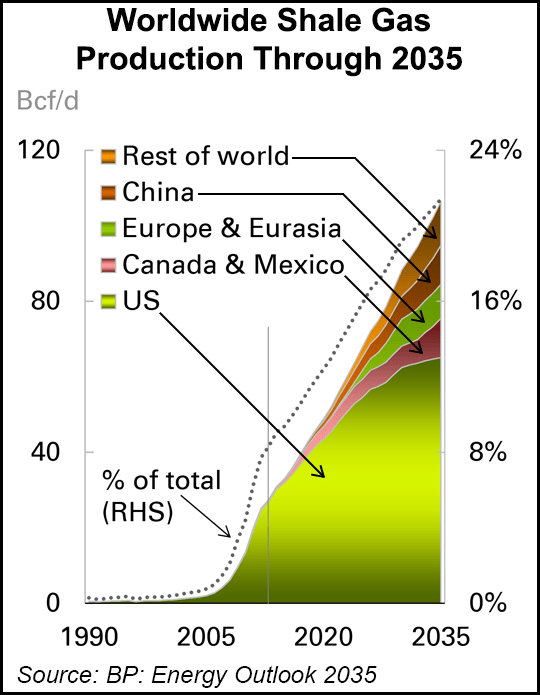 Christof Ruhl, who has led research for BP’s annual energy outlook for the past four years, said the latest forecast, extended by five years to 2035, indicates that the United States will be the world’s largest natural gas and liquids producer by 2035 from shale and tight gas and oil reserves.

By the end of the forecast period, the United States “will remain the largest gas producer in the world, accounting for nearly 20%” of the market,” Ruhl said. “The U.S. will also be the world’s largest liquids producer,” a reign that began in 2013.

Domestic shale gas production is forecast to double from 2012 to 65 Bcf/d, reaching nearly 70% of the total global output. Domestic tight oil output will triple to 4.5 million b/d and account for one-third of global liquids production, according to the forecast.

U.S. oil imports over the 23-year period are forecast to drop by nearly 75% to the lowest level on record, and the country becomes a net gas exporter by 2017. Growing tight oil production in the United States, and from oilsands in Canada, also will allow the region to become an oil exporter.

Last year the United States was the top oil producer in the world, and that won’t change, Ruhl said.

Specifically, BP is predicting that domestic tight oil output will triple to 4.5 million b/d and account for one-third of global liquids production.

Group CEO Bob Dudley, who shared a microphone for the presentation, noted that last year’s report forecast that North America likely would become energy self-sufficient. The latest findings more closely examined the phenomenon and came away with an even more optimistic outlook.

BP’s economics team now sees a future that “is different in several respects” because of the domestic unconventional revolution, said Dudley. The outlook “underlines the power of competition and market forces in driving efficiency and innovation — important not only in unlocking new supplies such as unconventional oil and gas but also in improving energy efficiency and consequently limiting the growth of carbon emissions.”

The biggest gains from unconventionals are the shifts in supply patterns, said the CEO. “The implications are far-reaching. Indeed, I believe they will stretch far beyond the boundaries of our industry.”

By 2035 — and for the first time in history — oil no longer will dominate. BP is predicting that over the next 23 years, gas supplies will continue their meteoric growth on the world’s stage to gain an even 27% share with oil and coal.

“North America’s case is very clear,” said Ruhl. “What you have here is a massive increase in shale gas production crowding out conventional gas to some extent…As a matter of fact, by the end of the outlook period, the produced volume of shale gas in the U.S. will be larger than conventional gas has ever been.”

“From 2011 to 2030 shale gas more than trebles and tight oil grows more than six-fold.Together they will account for almost a fifth of the increase in global energy supply to 2030.”

“These resources have boosted gas output by nearly 20% and oil by 30% in the past five years,” economists noted. “Assessing both global resources and ‘above ground’ factors, North America will continue to dominate production by 2030, even as other regions gradually adapt to develop their resources.”

“As an example, output in the Bakken has increased from 0.1 million b/d just five years ago to over 1 million b/d currently, roughly matching that of Colombia, as operators are drilling more oil wells than in all of Canada,” forecasters said.

“So far, only the U.S. and Canada have combined these variables to support rapid production growth. The pace of development elsewhere is likely to be measured, given the lengthy checklist of factors required for development of shale gas and tight oil resources.”