American crude output held even at a level well below the 2022 peak – and far from pre-pandemic highs – as demand leveled off and recessionary headwinds gathered force both in the United States and globally, the U.S. Energy Information Administration (EIA) said Wednesday. 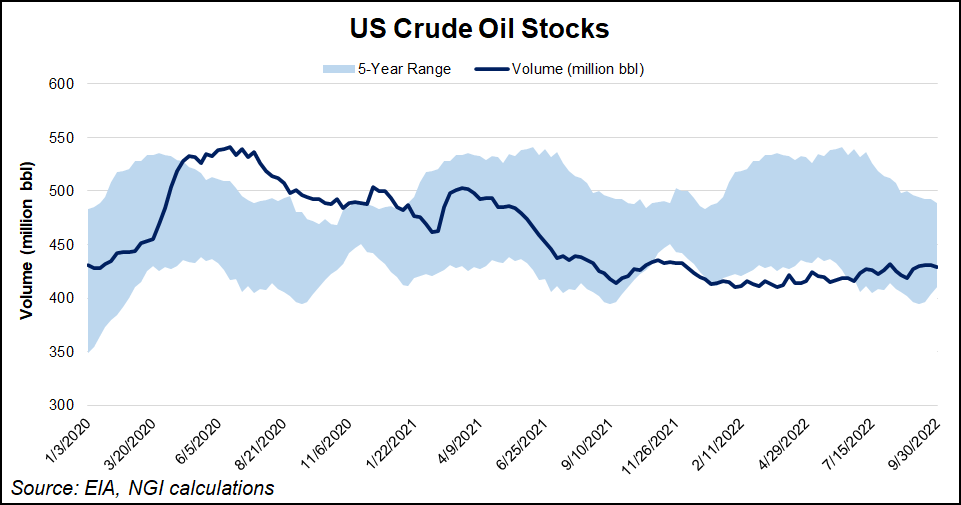 The government’s snapshot of domestic supply/demand came on the heels of an announcement from OPEC-plus that it plans to cut production in November by 2.0 million b/d.

The cartel has pointed to inflation-driven economic pressure in the United States and Europe as well as coronavirus-related limits on activity in China. Analysts suspected OPEC-plus sought to ease pressure on crude prices after a roughly 30% decline from a 2022 high reached in June.

Bill Farren-Price, director of Enverus Intelligence Research, said the group of oil-producing countries “is back in price defense mode.”

U.S. officials said the OPEC-plus move could stave off global supply/demand balance and reignite oil price hikes that had helped fuel a surge in inflation this year.

“At a time when maintaining a global supply of energy is of paramount importance, this decision will have the most negative impact on lower- and middle-income countries that are already reeling from elevated energy prices,” U.S. National Security Advisor Jake Sullivan and National Economic Council Director Brian Deese, senior aides to President Biden, said in a joint statement.

Biden had lobbied Saudi Arabia, which leads OPEC-plus alongside Russia, to maintain or even increase production to keep downward pressure on oil prices – and, by extension, gasoline prices for American consumers. The president also has encouraged U.S. producers to at least temporarily boost output to help contain inflation and guard against recession.

The White House said Wednesday that U.S. gas prices this week are down about $1.20/gallon from record levels over the summer. But the OPEC-plus decision could reverse the trend.

U.S. oil production for the week ended Sept. 30, meanwhile, held at 12.0 million b/d, on par with the previous week, EIA said in its latest Weekly Petroleum Status Report. That kept output below the 2022 high of 12.2 million b/d and far from the record level of 13.1 million b/d reached in March 2020.

Consumption was down from a year earlier. Total petroleum products supplied over the last four-week period averaged 20.0 million b/d, down 4% from the same period last year, according to EIA.

American producers, while more active overall in 2022, have moved with caution when it comes to supply increases because of choppy demand, political pressure to invest in renewable energy and, more recently, the specter of recession.

The Federal Reserve jacked up interest rates several times this year to raise borrowing costs and counter inflation. But the policy also has slowed spending and crimped economic activity. U.S. gross domestic product shrunk slightly in the second quarter. Third quarter estimates are due next month.

Against that backdrop, the American Exploration & Production Council (AXPC) called on Biden to focus less on Saudi production and more on U.S. output by lowering regulatory hurdles that stand before infrastructure investments and increased supplies domestically.

“The Biden Administration should be focused on increasing production here in the U.S. through thoughtful and comprehensive energy policy that helps bring down costs and makes us less reliant on foreign sources,” AXPC CEO Anne Bradbury said.