The first survey of buyers and sellers of natural gas in Mexico conducted by NGI’s Mexico GPI shows that U.S. price indexes are involved in the majority of transactions in Mexico. 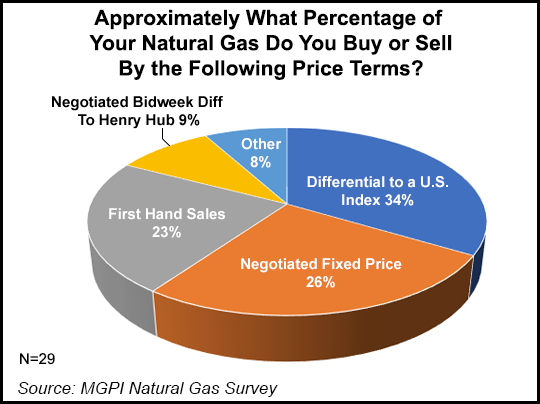 The survey received 29 responses from natural gas buyers and sellers in Mexico, one short of the 30-sample size generally considered by statistical theory as needed to approach the population mean, and so a fairly good measure of current realities in the market.

There was also ample representation of both buyers and sellers in the survey. Ten respondents were marketers, eight represented industrial end-users in Mexico, and five were gas producers.

“That certainly makes sense, considering how liquid U.S. indexes are,” said NGI’s Patrick Rau, director of strategy & research. “In the absence of liquid natural gas spot market indexes in Mexico, U.S. indexes do provide a good starting point, but they aren’t a perfect substitute for the Mexico market. For one, market fundamentals in the U.S. don’t necessarily reflect those in Mexico. Also, what do you do when referenced U.S. indexes turn negative, as has been the case in the Permian Basin lately?”

Rau said some VPM prices are linked to the El Paso-Permian index, which turned so negative in early April that it would have led to negative VPM prices had Pemex not made ad hoc adjustments.

“Negotiated fixed price deals are the backbone of the transactions that make up index prices in the U.S., especially in the day-ahead market, so the willingness of Mexico buyers and sellers to move away from pure VPM type of pricing speaks well to the potential future of indexes in Mexico,” said Rau.

Despite this, indexes won’t just pop up overnight in Mexico, Rau said. “It’s one thing for there to be a slate of transactions upon which price reporting agencies (PRAs) can calculate indexes, but enough industry players have to be willing to share that information with PRAs to make indexes possible.”

Transacting month-to-month is the most common delivery period in Mexico, according to the survey, with an average 44% of deals reported for this time length. Shorter-term weekly and daily deals both came in at 12%, but Rau said it could change once the Mexico pipeline system is developed further and becomes more fully integrated. “Creating additional delivery options will increase the ability for buyers to go more day-to-day for their purchases, if they so choose.”

Additionally, if Mexico is successful in materially increasing its domestic natural gas production, that would increase the size of the spot market, and likely lead to more daily deals as a result, according to Rau.

NGI’s Mexico GPI plans to establish spot market indexes at locations within Mexico, similar to what it does in both the United States and Canada, once the Mexican natural gas market becomes more established and liquid. To learn more about the pricing survey, and/or to contribute transactions to MGPI on a confidential basis to include in calculating future Mexico price indexes, contact prices@naturalgasintel.com.