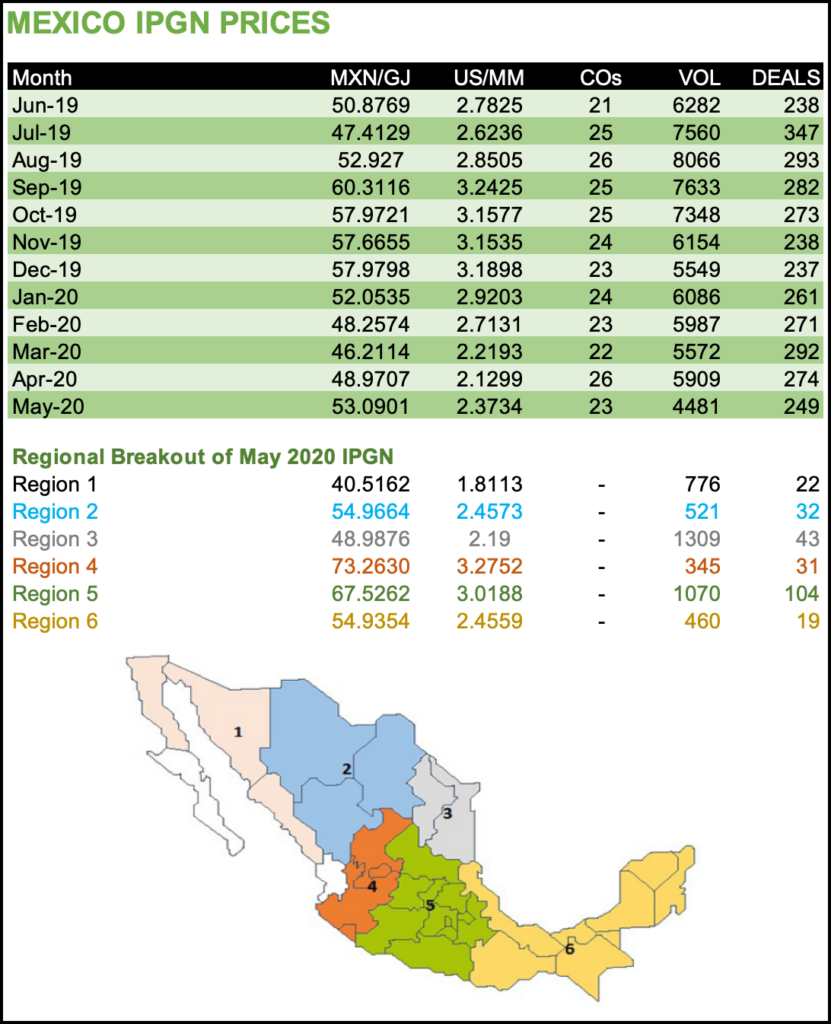 Pipeline natural gas exports to Mexico from the United States averaged an estimated 5.4 Bcf/d during the first half of June, up from about 4.7 Bcf/d for the whole month of May, according to an analysis by Genscape Inc.

He added, “Our cross-border flow data for the second half of June is still preliminary, but we do expect an uptick that will impact the month’s daily average and will potentially include new record-highs.”

The resurgence in Mexico gas imports comes amid a steadily rising count in the daily number of confirmed Covid-19 cases in the country.

Fallout from the virus appears to have impacted the amount of natural gas bought and sold in the country during May.

Marketers transacted 4.48 Bcf/d for the month, down from 7.02 Bcf/d in May 2019, according to the latest IPGN monthly natural gas price index published by the Comisión Reguladora de Energía (CRE).

The May 2020 volume is the lowest in the IPGN’s history with the exception of July 2017 (2.99 Bcf/d), which was the first month CRE published the index.

The May figure is down from 5.91 Bcf/d recorded in April.

The IPGN is composed of day-ahead spot prices reported to CRE by marketers, and is meant to serve as a proxy until Mexico’s trading hubs are liquid and transparent enough for third-party indexes to emerge.

Due to Mexico’s growing reliance on U.S. gas imports, Mexico is largely an extension of the U.S. gas market, with a majority of transactions in Mexico linked to U.S. pricing locations, namely Houston Ship Channel, Waha and Henry Hub.

In a webinar earlier this month, NGI’s Patrick Rau, head of strategy and research, highlighted that a growing number of gas transactions in Mexico are tied to the IPGN, while fewer contracts are tied to the firsthand sales (VPM) price published by national oil company Petróleos Mexicanos (Pemex).

This shows “that more and more companies in Mexico are becoming more comfortable purchasing gas from someone other than the incumbent supplier,” Rau said.

June also saw the launch by Mexico’s Centro Nacional de Control del Gas Natural (Cenagas) of this year’s Consulta Pública, or public consultation, to gauge the service and infrastructure needs of current and potential natural gas users, with a focus this year on the industrial segment.

Additionally, while the prevailing market wisdom in recent weeks said that curtailed U.S. crude oil production would drive corresponding declines in associated gas output, thereby boosting gas prices, the reality may not be so simple, according to RBN Energy, LLC CEO Rusty Braziel.

The thesis “was only half right, since production losses haven’t been accompanied by a boost in gas prices; rather, prices were crushed, in spite of the production trend,” Braziel said Monday. “And that is because the falloff in production has been more than matched by lower demand, with LNG feed gas coming off sharply, from 8 Bcf/d at the end of 2019 to only 4 Bcf/d so far this month as super-low gas prices in Europe and Asia led to rampant cancellations of LNG export cargoes.”