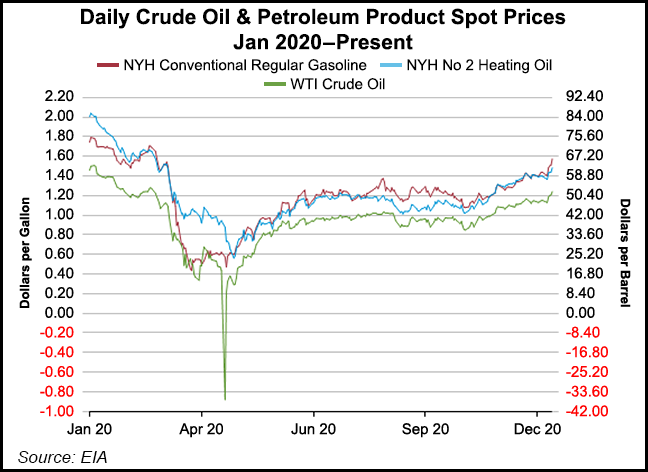 Despite a draw in the latest covered week, U.S. crude inventory of 482.2 million bbl was 8% above the five-year average for this time of year, EIA said.

Overall petroleum demand increased 15% week/week for the latest covered period and was up 3% from the same week a year earlier, according to the agency. Year/year gains have been rare in recent months, due to the ongoing disruptions imposed by the Covid-19 pandemic.

The rise in demand in the latest week was driven by a 41% year/year jump in propane and propylene consumption. This helped to offset continued weakness in jet fuel and gasoline demand, both of which have long been hampered by reduced travel tied to the pandemic. Demand for jet fuel was down 15% year/year, and gasoline demand fell 12%, EIA said.

Total products supplied – EIA’s measure of demand – averaged 18.8 million b/d over the past four weeks, down 6% from the same period a year earlier. Motor gasoline product supplied was down 11% over the same period, while jet fuel demand dropped 30%.

Production globally is set to decrease substantially over the next two months.U.S. oil prices eclipsed the $50/bbl threshold on Jan. 5, setting a 10-month high, after Saudi Arabia said it planned to cut oil production by 1 million b/d in February and March. Crude prices have hovered above $50 in the days since the Saudis announced the shift at the close of a monthly meeting of the Organization of the Petroleum Exporting Countries and its allies. Saudi Arabia leads the cartel.