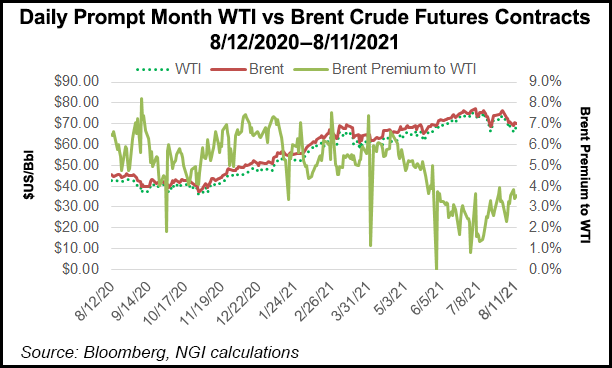 Commercial oil inventories in the week ended Aug. 6 — excluding those in the Strategic Petroleum Reserve — fell by 400,000 bbl from the previous week. At 438.8 million bbl, U.S. stocks are 6% below the five-year average, roughly on par with the deficit through most of the summer, EIA’s Weekly Petroleum Status Report showed.

Oil output averaged 11.3 million b/d last week, up from 11.2 million b/d the prior week. However, production held far lower than the early 2020 peak of 13.1 million b/d reached ahead of the coronavirus pandemic.

Demand decreased 8% week/week, possibly reflecting a recent pandemic surge driven by the Delta variant of the coronavirus. Virus cases are on the rise in every state in August, according to Centers for Disease Control and Prevention data, and they are spiking in states with relatively low vaccination rates.

“The Delta variant continues to be a major influence on the day-to-day trading” across commodities and stock markets because of demand worries, “as the new variant seems to be more transmittable just as the economy returns to some sense of normalcy,” said Mike Gibbs, managing director at Raymond James & Associates Inc.

Brent crude prices, the international benchmark, hovered around $71/bbl in intraday trading Wednesday. Brent had eclipsed $75 in late July, far higher than the $50 level at which it started 2021.

On a weekly basis, U.S. petroleum demand has ebbed and flowed in 2021. But overall consumption has held strong this year alongside a strengthening economy and increased demand for travel fuels. While the rising virus cases could interrupt this, the EIA data do not yet show a trend in that direction.

Against that demand backdrop — and expectations for increased consumption globally through 2021 — the Organization of the Petroleum Exporting Countries (OPEC) and its allies, aka OPEC-plus, are ramping up output this year. President Biden’s administration on Wednesday pressured the cartel to do even more, citing rising gasoline prices, supply shortages and overall inflation concerns.

Biden’s administration is pressing OPEC-plus, led by Saudi Arabia and Russia, “on the importance of competitive markets in setting prices,” National Security Advisor Jake Sullivan said in a rare public statement targeted at the cartel.

“Higher gasoline costs, if left unchecked, risk harming the ongoing global recovery. The price of crude oil has been higher than it was at the end of 2019, before the onset of the pandemic,” Sullivan said. “Competitive energy markets will ensure reliable and stable energy supplies, and OPEC-plus must do more to support the recovery.”

OPEC-plus countries pumped more than 2 million b/d back into the global market between May and July. That was on top of production increases earlier in the year.

The cartel last month also agreed to raise output by another 400,000 b/d monthly until it unwinds all of the cuts made amid the pandemic in 2020. The cartel slashed output by 9.7 million b/d last year.

Sullivan said more is needed. “These increases will not fully offset previous production cuts that OPEC-plus imposed during the pandemic until well into 2022,” he said. “At a critical moment in the global recovery, this is simply not enough.”

Biden critics, meanwhile, noted that the president is in the midst of pushing a $3.5 trillion budget package that would put the United States on a path to a carbon-free power sector by 2035 and a carbon-neutral economy by 2050 largely by supplanting oil with renewable fuels.

“The worst thing the Biden Administration can do” to gasoline prices “is restrict supply by implementing policies that make it harder to produce energy here in the U.S.,” said American Exploration and Production Council CEO Anne Bradbury.