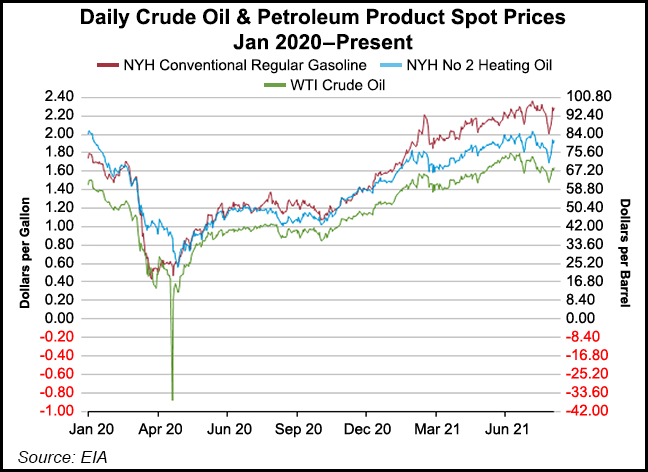 To be sure, fallout from Hurricane Ida and ongoing impacts of the coronavirus Delta variant add wrinkles for the weeks ahead. Production increase plans by the Organization of the Petroleum Exporting Countries (OPEC) could also alter the landscape. But through August, strong domestic demand for products derived from crude and its impact on supplies punctuated the U.S. oil narrative.

Demand has escalated through the summer months amid coronavirus vaccine rollouts and as Americans adapt to the pandemic despite the Delta mutation. Overall petroleum demand for the week ended Aug. 27 increased 5% from the prior week, lifted by increases in jet fuel and distillate oil consumption along with steady demand for motor gasoline, EIA’s Weekly Petroleum Status Report (WSPR) showed.

Overall demand of 22.8 million b/d for last week marked a 2021 high. Notably, demand was 6% ahead of the comparable week in 2019, before virus outbreaks.

Total products supplied – EIA’s terminology for demand — averaged 21.4 million b/d over the last four-week period, up 17% from the same period in 2020. Over the past four weeks, motor gasoline demand averaged 9.5 million b/d, up 7%, while distillate fuel consumption averaged 4.1 million b/d, up 10%. Jet fuel product supplied was up 52% to 1.5 million b/d.

Production inched up to 11.5 million b/d from 11.4 million b/d the prior period. Output was about 1.6 million b/d below the 2020 peak reached last March before the pandemic’s impact.

U.S. commercial oil inventories last week — excluding those in the Strategic Petroleum Reserve – decreased by 7.2 million bbl from the previous week. At 425.4 million bbl, crude stocks are 6% below the five-year average.

Analysts at ClearView Energy Partners LLC said demand shows few signs of waning, though last week’s robust levels are likely not sustainable into the fall. They said consumption last week was likely due “in part to stocking up on fuels across the supply chain ahead of Hurricane Ida,” and the next WPSR is bound to show the storm’s impact on “oil production, refinery utilization, imports/exports and demand.”

Separately, OPEC and its allies, aka OPEC-plus, agreed on Wednesday to continue its plan to increase production through September 2022.

Following earlier increases, the cartel last month agreed to raise output by another 400,000 b/d monthly until it unwinds all of the cuts made amid the pandemic in 2020. The cartel slashed output by 9.7 million b/d last year. Nearly 6 million b/d of that remains offline.

OPEC said in a statement Wednesday following a meeting of ministers from member countries that, while the pandemic’s effects “continue to cast some uncertainty, market fundamentals have strengthened” and oil “stocks continue to fall as the recovery accelerates.”

OPEC has pointed to the strong demand in the United States as well as in China and parts of Europe. It forecasted in August oil demand would rise by 5.95 million b/d this year, or nearly 7%, and grow another 3.3 million b/d next year.

OPEC data show that, barring a substantial shift in demand or a surge in U.S. production, the global market will face a deficit until the end of 2021.

“I think it would hurt OPEC-plus’ credibility to change the terms after only one month,” said Robert Yawger, Mizuho Securities USA LLC’s director of energy futures.

But he noted that the cartel’s production plan is far from cemented.

Indeed, should transportation fuel demand taper during the winter, as is often the case, the world oil market could quickly flip into a surplus next year by an average of 2.5 million b/d, OPEC’s researchers have said, leaving open the potential for OPEC-plus adjustments in coming months.

Rystad Energy’s Bjornar Tonhaugen, head of oil markets, questioned whether OPEC-plus was already overly optimistic about demand, “given the risk of new lockdowns to fight the unresolved Covid-mutant spread.”